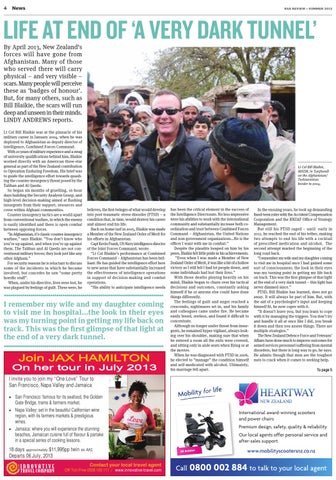 LIfE AT END Of ‘A VERy DARK TUNNEL’ By April 2013, New Zealand‘s forces will have gone from Afghanistan. Many of those who served there will carry physical – and very visible – scars. Many people will perceive these as ‘badges of honour’. But, for many others, such as Bill Blaikie, the scars will run deep and unseen in their minds. LINDY ANDREWS reports.

Lt Col Bill Blaikie was at the pinnacle of his military career in January 2004, when he was deployed to Afghanistan as deputy director of intelligence, Combined Forces Command. With 20 years of military experience and a swag of university qualifications behind him, Blaikie worked directly with an American three-star general as part of the New Zealand contribution to Operation Enduring Freedom. His brief was to guide the intelligence effort towards quashing the counter-insurgency threat posed by the Taliban and Al Qaeda. So began six months of gruelling, 16-hour days building the Security Analysis Group, and high-level decision-making aimed at flushing insurgents from their support, resources and cover within Afghani communities. Counter-insurgency tactics are a world apart from conventional warfare, in which the enemy is easily identified and there is open combat between opposing forces. “In Afghanistan, it’s classic counter-insurgency warfare,” says Blaikie. “You don’t know who you’re up against, and when you’re up against them. The Taliban and Al Qaeda are not conventional military forces; they look just like any other Afghani.” For security reasons he is reluctant to discuss some of the incidents in which he became involved, but concedes he saw “some pretty horrific stuff”. When, under his directive, lives were lost, he was plagued by feelings of guilt. These were, he

Lt Col Bill Blaikie, MNZM, in Turghundi on the Afghanistan/ Turkmenistan border in 2004.

believes, the first twinges of what would develop into post-traumatic stress disorder (PTSD) – a condition that, in time, would destroy his career and almost end his life. Back on home turf in 2005, Blaikie was made a Member of the New Zealand Order of Merit for his efforts in Afghanistan. Capt Kevin Frank, US Navy intelligence director of the Joint Forces Command, wrote: “Lt Col Blaikie’s performance at Combined Forces Command – Afghanistan has been brilliant. He has guided the intelligence effort here to new areas that have substantially increased the effectiveness of intelligence operations in support of decision-making and combat operations. “His ability to anticipate intelligence needs

I remember my wife and my daughter coming to visit me in hospital...the look in their eyes was my turning point in getting my life back on track. This was the first glimpse of that light at the end of a very dark tunnel.

I invite you to join my “One Love” Tour to San Francisco, Napa Valley and Jamaica • San Francisco: famous for its seafood, the Golden

• Jamaica: where you will experience the stunning

has been the critical element in the success of the Intelligence Directorate. No less impressive were his abilities to work with the international community and substantially increase both coordination and trust between Combined Forces Command – Afghanistan, the United Nations and non-government organisations…He is the officer I want with me in combat.” Despite the plaudits heaped on him by his peers, Blaikie felt little pride in his achievements. “Even when I was made a Member of New Zealand Order of Merit, it was like a bit of a hollow victory as I still felt I had let people down, and some individuals had lost their lives.” With those deaths playing heavily on his mind, Blaikie began to churn over his tactical decisions and outcomes, constantly asking himself if he or anyone else could have done things differently. The feelings of guilt and anger reached a crescendo, nightmares set in, and his family and colleagues came under fire. He became easily bored, restless, and found it difficult to concentrate. Although no longer under threat from insurgents, he remained hyper-vigilant, always looking over his shoulder, making sure that when he entered a room all the exits were covered, and sitting only in aisle seats when flying or at the movies. When he was diagnosed with PTSD in 2006, he elected to “manage” the condition himself and self-medicated with alcohol. Ultimately, his marriage fell apart.

In the ensuing years, he took up demanding fixed-term roles with the Accident Compensation Corporation and the RNZAF Office of Strategy Management. But still his PTSD raged – until early in 2012, he reached the end of his tether, making two attempts to end his life with a cocktail of prescribed medication and alcohol. The second attempt marked the beginning of the long road back. “I remember my wife and my daughter coming to visit me in hospital once I had gained some sort of consciousness; the look in their eyes was my turning point in getting my life back on track. This was the first glimpse of that light at the end of a very dark tunnel – this light has never dimmed since.” PTSD, Bill Blaikie has learned, does not go away. It will always be part of him. But, with the aid of a psychologist’s input and keeping himself fit, he now copes with it. “It doesn’t leave you, but you learn to cope with it by managing the triggers. You don’t try and handle it all at once like I did, you break it down and then you assess things. There are multiple strategies.” The New Zealand Defence Force and Veterans’ Affairs have done much to improve outcomes for armed services personnel suffering from mental disorders, but there is long way to go, he says. He admits though that men are the toughest nuts to crack when it comes to seeking help. To page 5