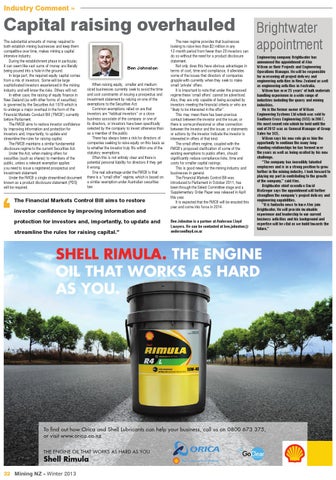 Capital raising overhauled The substantial amounts of money required to both establish mining businesses and keep them competitive over time, makes mining a capital intensive industry. During the establishment phase in particular, it can seem like vast sums of money are literally being poured into a hole in the ground. In large part, the required equity capital comes from a mix of investors. Some will be large sophisticated investors experienced in the mining industry and will know the risks. Others will not. In either case, the raising of equity finance in New Zealand (as with other forms of securities) is governed by the Securities Act 1978 which is to undergo a major overhaul in the form of the Financial Markets Conduct Bill (‘FMCB’) currently before Parliament. The FMCB aims to restore investor confidence by improving information and protection for investors and, importantly, to update and streamline the rules for raising capital. The FMCB maintains a similar fundamental disclosure regime to the current Securities Act. Under the Act, when making offers for securities (such as shares) to members of the public, unless a relevant exemption applies you need to issue a registered prospectus and investment statement. Under the FMCB a single streamlined document known as a product disclosure statement (PDS) will be required.

When raising equity, smaller and medium sized businesses currently seek to avoid the time and cost constraints of issuing a prospectus and investment statement by relying on one of the exemptions to the Securities Act. Common exemptions relied on are that investors are “habitual investors” or a close business associate of the company or one of its directors, or investors have been specifically selected by the company to invest otherwise than as a member of the public. There has always been a risk for directors of companies seeking to raise equity on this basis as to whether the investor truly fits within one of the statutory exemptions. Often this is not entirely clear and there is potential personal liability for directors if they get it wrong. One real advantage under the FMCB is that there is a “small offer” regime, which is based on a similar exemption under Australian securities law.

The Financial Markets Control Bill aims to restore investor confidence by improving information and protection for investors and, importantly, to update and streamline the rules for raising capital.”

The new regime provides that businesses looking to raise less than $2 million in any 12-month period from fewer than 20 investors can do so without the need for a product disclosure statement. Not only does this have obvious advantages in terms of cost, time and compliance, it alleviates some of the issues that directors of companies grapple with currently when they seek to make small ‘private’ offers. It is important to note that under the proposed regime these ‘small offers’ cannot be advertised. Also, they are only capable of being accepted by investors meeting the financial criteria or who are “likely to be interested in the offer”. This may mean there has been previous contact between the investor and the issuer, or there is some professional or other connection between the investor and the issuer, or statements or actions by the investor indicate the investor is interested in offers of that kind. The small offers regime, coupled with the FMCB’s proposed clarification of some of the existing exemptions to public offers, should significantly reduce compliance risks, time and costs for smaller capital raisings. This is good news for the mining industry and businesses in general. The Financial Markets Control Bill was introduced to Parliament in October 2011, has been through the Select Committee stage and a Supplementary Order Paper was released in April this year. It is expected that the FMCB will be enacted this year and come into force in 2014. Ben Johnston is a partner at Anderson Lloyd Lawyers. He can be contacted at ben.johnston@ andersonlloyd.co.nz

Brightwater appointment Engineering company Brightwater has announced the appointment of Alex Wilson as their Projects and Engineering Operations Manager. He will be responsible for overseeing all project delivery and engineering activities in New Zealand as well as engineering activities in Australia. Wilson has over 25 years’ of bulk materials handling experience in a wide range of industries including the quarry and mining industries. He is the former owner of Wilson Engineering Systems Ltd which was sold to Southern Cross Engineering (SCE) in 2007. His most recent role which he held until the end of 2012 was as General Manager of Group Sales for SCE. Wilson says his new role gives him the opportunity to continue the many longstanding relationships he has formed over the years as well as being excited by his new challenge. “The company has incredibly talented employees and is in a strong position to grow further in the mining industry. I look forward to playing my part in contributing to the growth of the company,” said Alex. Brightwater chief executive David McGregor says the appointment will further strengthen the company’s project delivery and engineering capabilities. “It is fantastic news to have Alex join Brightwater. He will provide invaluable experience and leadership to our current business activities and his background and expertise will be vital as we build towards the future.”

SHELL RIMULA. THE ENGINE OIL THAT WORKS AS HARD AS YOU.

To find out how Orica and Shell Lubricants can help your business, call us on 0800 673 375, or visit www.orica.co.nz THE ENGINE OIL THAT WORKS AS HARD AS YOU