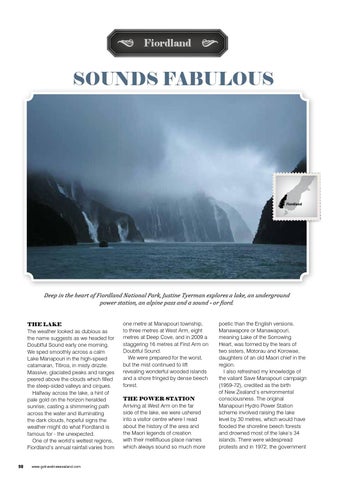 Deep in the heart of Fiordland National Park, Justine Tyerman explores a lake, an underground power station, an alpine pass and a sound - or fiord. THE LAKE The weather looked as dubious as the name suggests as we headed for Doubtful Sound early one morning. We sped smoothly across a calm Lake Manapouri in the high-speed catamaran, Titiroa, in misty drizzle. Massive, glaciated peaks and ranges peered above the clouds which filled the steep-sided valleys and cirques. Halfway across the lake, a hint of pale gold on the horizon heralded sunrise, casting a shimmering path across the water and illuminating the dark clouds, hopeful signs the weather might do what Fiordland is famous for - the unexpected. One of the world’s wettest regions, Fiordland’s annual rainfall varies from 98

one metre at Manapouri township, to three metres at West Arm, eight metres at Deep Cove, and in 2009 a staggering 16 metres at First Arm on Doubtful Sound. We were prepared for the worst, but the mist continued to lift revealing wonderful wooded islands and a shore fringed by dense beech forest. THE POWER STATION Arriving at West Arm on the far side of the lake, we were ushered into a visitor centre where I read about the history of the area and the Maori legends of creation with their mellifluous place names which always sound so much more

poetic than the English versions. Manawapore or Manawapouri, meaning Lake of the Sorrowing Heart, was formed by the tears of two sisters, Motorau and Korowae, daughters of an old Maori chief in the region. I also refreshed my knowledge of the valiant Save Manapouri campaign (1959-72), credited as the birth of New Zealand’s environmental consciousness. The original Manapouri Hydro Power Station scheme involved raising the lake level by 30 metres, which would have flooded the shoreline beech forests and drowned most of the lake’s 34 islands. There were widespread protests and in 1972, the government

Take a trip through our amazing regions with so many different activities and attractions to make your holiday worthwhile. Our travel writer...

Take a trip through our amazing regions with so many different activities and attractions to make your holiday worthwhile. Our travel writer...