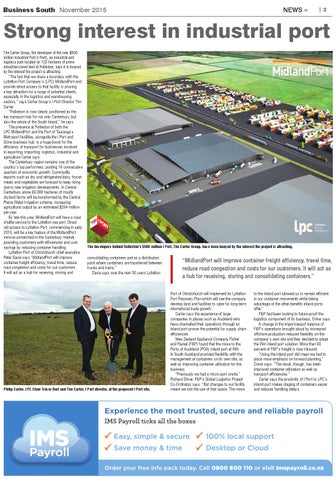 Strong interest in industrial port The Carter Group, the developer of the new $500 million Industrial Port (I Port), an industrial and logistics park located on 122 hectares of prime industrial-zoned land at Rolleston, says it is buoyed by the interest the project is attracting.

“The fact that we share a boundary with the Lyttelton Port Company’s (LPC) MidlandPort and provide direct access to that facility is proving a key attraction for a range of potential clients, especially in the logistics and warehousing sectors,” says Carter Group’s I Port Director Tim Carter. “Rolleston is now clearly positioned as the key transport hub for not only Canterbury, but also the whole of the South Island,” he says. The presence at Rolleston of both the LPC MidlandPort and the Port of Tauranga’s Metroport facilities, alongside the I Port and iZone business hub, is a huge boost for the efficiency of transport for businesses involved in exporting, importing, logistics, industrial and agriculture Carter says. The Canterbury region remains one of the country’s top performers, posting 16 consecutive quarters of economic growth. Commodity exports such as dry and refrigerated dairy, frozen meats and vegetables are forecast to keep rising due to new irrigation developments. In Central Canterbury alone 60,000 hectares of mostly dryland farms will be transformed by the Central Plains Water Irrigation scheme, increasing agricultural output by an estimated $264 million per year. By late this year, MidlandPort will have a road shuttle service to the Lyttelton sea port. Direct rail access to Lyttelton Port, commencing in early 2016, will be a key feature of the MidlandPort service unmatched in the Canterbury market, providing customers with efficiencies and cost savings by reducing container handling. Lyttelton Port of Christchurch chief executive Peter Davie says “MidlandPort will improve container freight efficiency, travel time, reduce road congestion and costs for our customers. It will act as a hub for receiving, storing and

The developers behind Rolleston’s $500 million I Port, The Carter Group, have been buoyed by the interest the project is attracting.

consolidating containers and as a distribution point where containers are transferred between trucks and trains.” Davie says over the next 30 years Lyttelton

“MidlandPort will improve container freight efficiency, travel time, reduce road congestion and costs for our customers. It will act as a hub for receiving, storing and consolidating containers.” Port of Christchurch will implement its Lyttelton Port Recovery Plan which will see the company develop land and facilities to cater for long-term international trade growth. Carter says the experience of large companies in places such as Auckland who have channelled their operations through an inland port proves the potential for supply chain efficiencies. New Zealand Appliance Company Fisher and Paykel (F&amp;P) found that the move to the Ports of Auckland (POA) inland port at Wiri in South Auckland provided flexibility with the management of containers on its own site, as well as improving container utilisation for the business. “Previously we had a micro-port onsite,” Richard Driver, F&amp;P’s Global Logistics Project Co-Ordinator, says. “But changes to our facility meant we lost the use of that space. The move

to the inland port allowed us to remain efficient in our container movements while taking advantage of the other benefits inland ports offer.” F&amp;P had been looking to future-proof the logistics component of its business, Driver says. A change in the import/export balance of F&amp;P’s operations brought about by increased offshore production reduced flexibility on the company’s own site and they decided to adopt the Wiri inland port solution. More than 60 percent of F&amp;P’s freight is now inbound. “Using the inland port did mean we had to place more emphasis on forward planning,” Driver says. “The result, though, has been improved container utilisation as well as transport efficiencies.” Carter says the proximity of I Port to LPC’s inland port makes staging of containers easier and reduces handling delays. 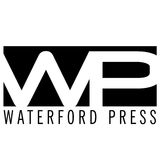