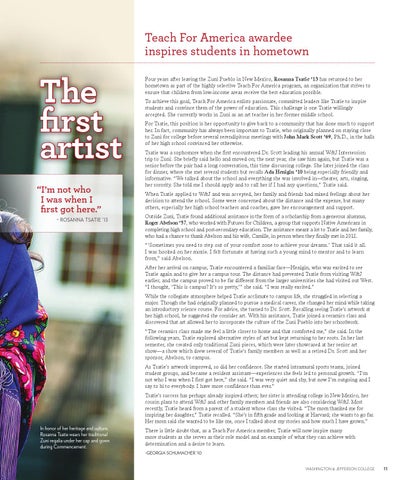 The first artist “I’m not who I was when I first got here.” – ROSANNA TSATIE ’13

Four years after leaving the Zuni Pueblo in New Mexico, Rosanna Tsatie ’13 has returned to her hometown as part of the highly selective Teach For America program, an organization that strives to ensure that children from low-income areas receive the best education possible. To achieve this goal, Teach For America enlists passionate, committed leaders like Tsatie to inspire students and convince them of the power of education. This challenge is one Tsatie willingly accepted. She currently works in Zuni as an art teacher in her former middle school. For Tsatie, this position is her opportunity to give back to a community that has done much to support her. In fact, community has always been important to Tsatie, who originally planned on staying close to Zuni for college before several serendipitous meetings with John Mark Scott ’69, Ph.D., in the halls of her high school convinced her otherwise. Tsatie was a sophomore when she first encountered Dr. Scott leading his annual W&J Intersession trip to Zuni. She briefly said hello and moved on; the next year, she saw him again, but Tsatie was a senior before the pair had a long conversation, this time discussing college. She later joined the class for dinner, where she met several students but recalls Ada Henigin ’10 being especially friendly and informative. “We talked about the school and everything she was involved in—theater, arts, singing, her sorority. She told me I should apply and to call her if I had any questions,” Tsatie said. When Tsatie applied to W&J and was accepted, her family and friends had mixed feelings about her decision to attend the school. Some were concerned about the distance and the expense, but many others, especially her high school teachers and coaches, gave her encouragement and support. Outside Zuni, Tsatie found additional assistance in the form of a scholarship from a generous alumnus, Roger Abelson ’57, who worked with Futures for Children, a group that supports Native Americans in completing high school and post-secondary education. The assistance meant a lot to Tsatie and her family, who had a chance to thank Abelson and his wife, Camille, in person when they finally met in 2012. “‘Sometimes you need to step out of your comfort zone to achieve your dreams.’ That said it all. I was hooked on her moxie. I felt fortunate at having such a young mind to mentor and to learn from,” said Abelson. After her arrival on campus, Tsatie encountered a familiar face—Henigin, who was excited to see Tsatie again and to give her a campus tour. The distance had prevented Tsatie from visiting W&J earlier, and the campus proved to be far different from the larger universities she had visited out West. “I thought, ‘This is campus? It’s so pretty,’” she said. “I was really excited.” While the collegiate atmosphere helped Tsatie acclimate to campus life, she struggled in selecting a major. Though she had originally planned to pursue a medical career, she changed her mind while taking an introductory science course. For advice, she turned to Dr. Scott. Recalling seeing Tsatie’s artwork at her high school, he suggested she consider art. With his assistance, Tsatie joined a ceramics class and discovered that art allowed her to incorporate the culture of the Zuni Pueblo into her schoolwork. “The ceramics class made me feel a little closer to home and that comforted me,” she said. In the following years, Tsatie explored alternative styles of art but kept returning to her roots. In her last semester, she created only traditional Zuni pieces, which were later showcased at her senior art show—a show which drew several of Tsatie’s family members as well as a retired Dr. Scott and her sponsor, Abelson, to campus. As Tsatie’s artwork improved, so did her confidence. She started intramural sports teams, joined student groups, and became a resident assistant—experiences she feels led to personal growth. “I’m not who I was when I first got here,” she said. “I was very quiet and shy, but now I’m outgoing and I say to hi to everybody. I have more confidence than ever.” Tsatie’s success has perhaps already inspired others; her sister is attending college in New Mexico, her cousin plans to attend W&J and other family members and friends are also considering W&J. Most recently, Tsatie heard from a parent of a student whose class she visited. “The mom thanked me for inspiring her daughter,” Tsatie recalled. “She’s in fifth grade and looking at Harvard; she wants to go far. Her mom said she wanted to be like me, once I talked about my stories and how much I have grown.”

In honor of her heritage and culture, Rosanna Tsatie wears her traditional Zuni regalia under her cap and gown during Commencement.

There is little doubt that, as a Teach For America member, Tsatie will now inspire many more students as she serves as their role model and an example of what they can achieve with determination and a desire to learn. -GEORGIA SCHUMACHER ’10 WASHINGTON & JEFFERSON COLLEGE 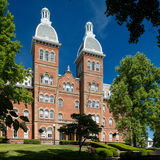