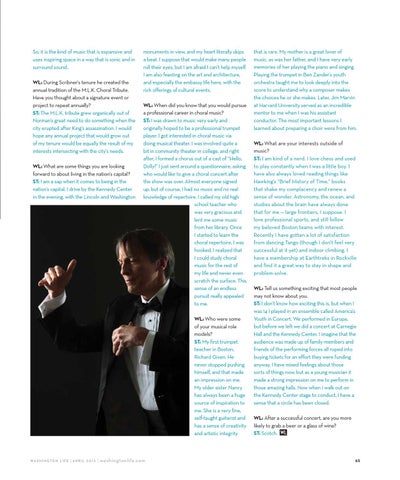 So, it is the kind of music that is expansive and uses inspiring space in a way that is sonic and in surround sound.. WL: During Scribner’s tenure he created the annual tradition of the M.L.K. Choral Tribute. Have you thought about a signature event or project to repeat annually? STThe M.L.K. tribute grew organically out of Norman’s great need to do something when the city erupted after King’s assassination. I would hope any annual project that would grow out of my tenure would be equally the result of my interests intersecting with the city’s needs. WL: What are some things you are looking forward to about living in the nation’s capital? STI am a sap when it comes to being in the nation’s capital. I drive by the Kennedy Center in the evening, with the Lincoln and Washington

monuments in view, and my heart literally skips a beat. I suppose that would make many people roll their eyes, but I am afraid I can’t help myself. I am also feasting on the art and architecture, and especially the embassy life here, with the rich offerings of cultural events. WL: When did you know that you would pursue a professional career in choral music? STI was drawn to music very early and originally hoped to be a professional trumpet player. I got interested in choral music via doing musical theater. I was involved quite a bit in community theater in college, and right after, I formed a chorus out of a cast of “Hello, Dolly!” I just sent around a questionnaire, asking who would like to give a choral concert after the show was over. Almost everyone signed up, but of course, I had no music and no real knowledge of repertoire. I called my old high school teacher who was very gracious and lent me some music from her library. Once I started to learn the choral repertoire, I was hooked. I realized that I could study choral music for the rest of my life and never even scratch the surface. This sense of an endless pursuit really appealed to me. WL: Who were some of your musical role models? STMy first trumpet teacher in Boston, Richard Given. He never stopped pushing himself, and that made an impression on me. My older sister Nancy has always been a huge source of inspiration to me. She is a very fine, self-taught guitarist and has a sense of creativity and artistic integrity

that is rare. My mother is a great lover of music, as was her father, and I have very early memories of her playing the piano and singing. Playing the trumpet in Ben Zander’s youth orchestra taught me to look deeply into the score to understand why a composer makes the choices he or she makes. Later, Jim Marvin at Harvard University served as an incredible mentor to me when I was his assistant conductor. The most important lessons I learned about preparing a choir were from him. WL: What are your interests outside of music? STI am kind of a nerd. I love chess and used to play constantly when I was a little boy. I have also always loved reading things like Hawking’s “Brief History of Time,” books that shake my complacency and renew a sense of wonder. Astronomy, the ocean, and studies about the brain have always done that for me — large frontiers, I suppose. I love professional sports, and still follow my beloved Boston teams with interest. Recently I have gotten a lot of satisfaction from dancing Tango (though I don’t feel very successful at it yet) and indoor climbing. I have a membership at Earthtreks in Rockville and find it a great way to stay in shape and problem-solve. WL: Tell us something exciting that most people may not know about you. STI don’t know how exciting this is, but when I was 14 I played in an ensemble called America’s Youth in Concert. We performed in Europe, but before we left we did a concert at Carnegie Hall and the Kennedy Center. I imagine that the audience was made up of family members and friends of the performing forces all roped into buying tickets for an effort they were funding anyway. I have mixed feelings about those sorts of things now, but as a young musician it made a strong impression on me to perform in those amazing halls. Now when I walk out on the Kennedy Center stage to conduct, I have a sense that a circle has been closed. WL: After a successful concert, are you more likely to grab a beer or a glass of wine? STScotch.