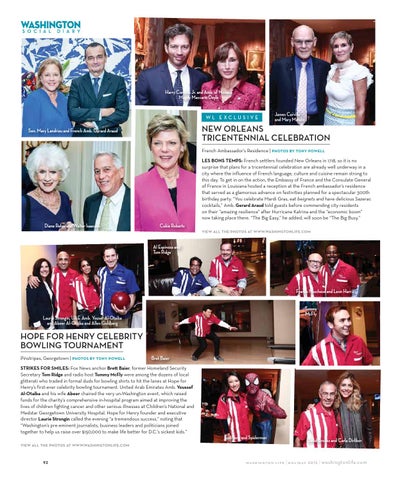 French Ambassador’s Residence | PHOTOSBYTONYPOWELL LES BONS TEMPS: French settlers founded New Orleans in 1718, so it is no surprise that plans for a tricentennial celebration are already well underway in a city where the influence of French language, culture and cuisine remain strong to this day. To get in on the action, the Embassy of France and the Consulate General of France in Louisiana hosted a reception at the French ambassador’s residence that served as a glamorous advance on festivities planned for a spectacular 300th birthday party. “You celebrate Mardi Gras, eat beignets and have delicious Sazerac cocktails,” Amb. Gerard Araud told guests before commending city residents on their “amazing resilience” after Hurricane Katrina and the “economic boom” now taking place there. “The Big Easy,” he added, will soon be “The Big Busy.”