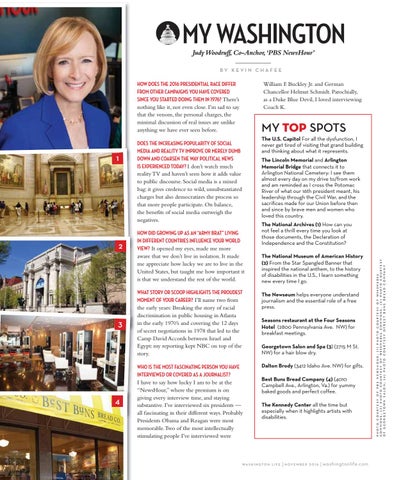 HOW DOES THE 2016 PRESIDENTIAL RACE DIFFER FROM OTHER CAMPAIGNS YOU HAVE COVERED SINCE YOU STARTED DOING THEM IN 1976? There’s nothing like it, not even close. I’m sad to say that the venom, the personal charges, the minimal discussion of real issues are unlike anything we have ever seen before.

MY TOP SPOTS The U.S. Capitol For all the dysfunction, I never get tired of visiting that grand building and thinking about what it represents.

DOES THE INCREASING POPULARITY OF SOCIAL MEDIA AND REALITY TV IMPROVE OR MERELY DUMB DOWN AND COARSEN THE WAY POLITICAL NEWS IS EXPERIENCED TODAY? I don’t watch much reality TV and haven’t seen how it adds value to public discourse. Social media is a mixed bag: it gives credence to wild, unsubstantiated charges but also democratizes the process so that more people participate. On balance, the benefits of social media outweigh the negatives.

The Lincoln Memorial and Arlington Memorial Bridge that connects it to Arlington National Cemetery: I see them almost every day on my drive to/from work and am reminded as I cross the Potomac River of what our 16th president meant, his leadership through the Civil War, and the sacrifices made for our Union before then and since by brave men and women who loved this country.

HOW DID GROWING UP AS AN “ARMY BRAT” LIVING IN DIFFERENT COUNTRIES INFLUENCE YOUR WORLD VIEW? It opened my eyes, made me more aware that we don’t live in isolation. It made me appreciate how lucky we are to live in the United States, but taught me how important it is that we understand the rest of the world. WHAT STORY OR SCOOP HIGHLIGHTS THE PROUDEST MOMENT OF YOUR CAREER? I’ll name two from the early years: Breaking the story of racial discrimination in public housing in Atlanta in the early 1970’s and covering the 12 days of secret negotiations in 1978 that led to the Camp David Accords between Israel and Egypt: my reporting kept NBC on top of the story. WHO IS THE MOST FASCINATING PERSON YOU HAVE INTERVIEWED OR COVERED AS A JOURNALIST? I have to say how lucky I am to be at the “NewsHour,” where the premium is on giving every interview time, and staying substantive. I’ve interviewed six presidents — all fascinating in their different ways. Probably Presidents Obama and Reagan were most memorable. Two of the most intellectually stimulating people I’ve interviewed were

The National Archives (1) How can you not feel a thrill every time you look at those documents, the Declaration of Independence and the Constitution? The National Museum of American History (2) From the Star Spangled Banner that inspired the national anthem, to the history of disabilities in the U.S., I learn something new every time I go. The Newseum helps everyone understand journalism and the essential role of a free press. Seasons restaurant at the Four Seasons Hotel (2800 Pennsylvania Ave. NW) for breakfast meetings. Georgetown Salon and Spa (3) (2715 M St. NW) for a hair blow dry. Dalton Brody (3412 Idaho Ave. NW) for gifts. Best Buns Bread Company (4) (4010 Campbell Ave., Arlington, Va.) for yummy baked goods and perfect coffee. The Kennedy Center all the time but especially when it highlights artists with disabilities.