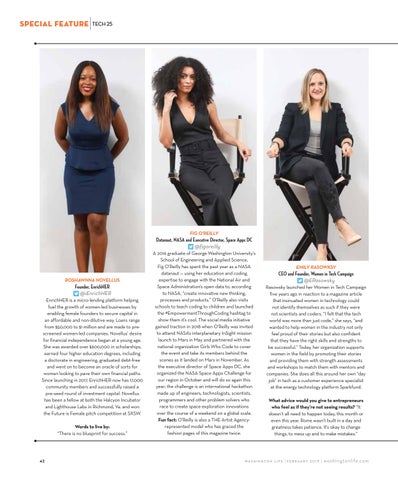 Founder, EnrichHER @iEnrichHER EnrichHER is a micro-lending platform helping fuel the growth of women-led businesses by enabling female founders to secure capital in an affordable and non-dilutive way. Loans range from $50,000 to $1 million and are made to prescreened women-led companies. Novellus’ desire for financial independence began at a young age. She was awarded over $600,000 in scholarships, earned four higher education degrees, including a doctorate in engineering, graduated debt-free and went on to become an oracle of sorts for women looking to pave their own financial paths. Since launching in 2017, EnrichHER now has 17,000 community members and successfully raised a pre-seed round of investment capital. Novellus has been a fellow at both the Halcyon Incubator and Lighthouse Labs in Richmond, Va. and won the Future is Female pitch competition at SXSW. Words to live by: “There is no blueprint for success.”

A 2016 graduate of George Washington University’s School of Engineering and Applied Science, Fig O’Reilly has spent the past year as a NASA datanaut — using her education and coding expertise to engage with the National Air and Space Administration’s open data to, according to NASA, “create innovative new thinking, processes and products.” O’Reilly also visits schools to teach coding to children and launched the #EmpowermentThroughCoding hashtag to show them it’s cool. The social media initiative gained traction in 2018 when O’Reilly was invited to attend NASA’s interplanetary InSight mission launch to Mars in May and partnered with the national organization Girls Who Code to cover the event and take its members behind the scenes as it landed on Mars in November. As the executive director of Space Apps DC, she organized the NASA Space Apps Challenge for our region in October and will do so again this year; the challenge is an international hackathon made up of engineers, technologists, scientists, programmers and other problem solvers who race to create space exploration innovations over the course of a weekend on a global scale. Fun fact: O’Reilly is also a THE Artist Agencyrepresented model who has graced the fashion pages of this magazine twice.

CEO and Founder, Women in Tech Campaign @ERasowsky Rasowsky launched her Women in Tech Campaign five years ago in reaction to a magazine article that insinuated women in technology could not identify themselves as such if they were not scientists and coders. “I felt that the tech world was more than just code,” she says, “and wanted to help women in the industry not only feel proud of their stories but also confident that they have the right skills and strengths to be successful.” Today, her organization supports women in the field by promoting their stories and providing them with strength assessments and workshops to match them with mentors and companies. She does all this around her own “day job” in tech as a customer experience specialist at the energy technology platform Sparkfund. What advice would you give to entrepreneurs who feel as if they’re not seeing results? “It doesn’t all need to happen today, this month or even this year. Rome wasn’t built in a day and greatness takes patience. It’s okay to change things, to mess up and to make mistakes.”