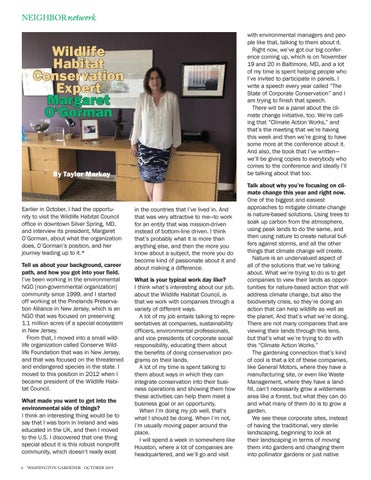 NEIGHBORnwork with environmental managers and people like that, talking to them about it. Right now, we’ve got our big conference coming up, which is on November 19 and 20 in Baltimore, MD, and a lot of my time is spent helping people who I’ve invited to participate in panels. I write a speech every year called “The State of Corporate Conservation” and I am trying to finish that speech. There will be a panel about the climate change initiative, too. We’re calling that “Climate Action Works,” and that’s the meeting that we’re having this week and then we’re going to have some more at the conference about it. And also, the book that I’ve written— we’ll be giving copies to everybody who comes to the conference and ideally I’ll be talking about that too.

Earlier in October, I had the opportunity to visit the Wildlife Habitat Council office in downtown Silver Spring, MD, and interview its president, Margaret O’Gorman, about what the organization does, O’Gorman’s position, and her journey leading up to it.* Tell us about your background, career path, and how you got into your field. I’ve been working in the environmental NGO [non-governmental organization] community since 1999, and I started off working at the Pinelands Preservation Alliance in New Jersey, which is an NGO that was focused on preserving 1.1 million acres of a special ecosystem in New Jersey. From that, I moved into a small wildlife organization called Conserve Wildlife Foundation that was in New Jersey, and that was focused on the threatened and endangered species in the state. I moved to this position in 2012 when I became president of the Wildlife Habitat Council. What made you want to get into the environmental side of things? I think an interesting thing would be to say that I was born in Ireland and was educated in the UK, and then I moved to the U.S. I discovered that one thing special about it is this robust nonprofit community, which doesn’t really exist 6

in the countries that I’ve lived in. And that was very attractive to me—to work for an entity that was mission-driven instead of bottom-line driven. I think that’s probably what it is more than anything else, and then the more you know about a subject, the more you do become kind of passionate about it and about making a difference. What is your typical work day like? I think what’s interesting about our job, about the Wildlife Habitat Council, is that we work with companies through a variety of different ways. A lot of my job entails talking to representatives at companies, sustainability officers, environmental professionals, and vice presidents of corporate social responsibility, educating them about the benefits of doing conservation programs on their lands. A lot of my time is spent talking to them about ways in which they can integrate conservation into their business operations and showing them how these activities can help them meet a business goal or an opportunity. When I’m doing my job well, that’s what I should be doing. When I’m not, I’m usually moving paper around the place. I will spend a week in somewhere like Houston, where a lot of companies are headquartered, and we’ll go and visit

Talk about why you’re focusing on climate change this year and right now. One of the biggest and easiest approaches to mitigate climate change is nature-based solutions. Using trees to soak up carbon from the atmosphere, using peak lands to do the same, and then using nature to create natural buffers against storms, and all the other things that climate change will create. Nature is an undervalued aspect of all of the solutions that we’re talking about. What we’re trying to do is to get companies to view their lands as opportunities for nature-based action that will address climate change, but also the biodiversity crisis, so they’re doing an action that can help wildlife as well as the planet. And that’s what we’re doing. There are not many companies that are viewing their lands through this lens, but that’s what we’re trying to do with this “Climate Action Works.” The gardening connection that’s kind of cool is that a lot of these companies, like General Motors, where they have a manufacturing site, or even like Waste Management, where they have a landfill, can’t necessarily grow a wilderness area like a forest, but what they can do and what many of them do is to grow a garden. We see these corporate sites, instead of having the traditional, very sterile landscaping, beginning to look at their landscaping in terms of moving them into gardens and changing them into pollinator gardens or just native 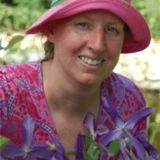