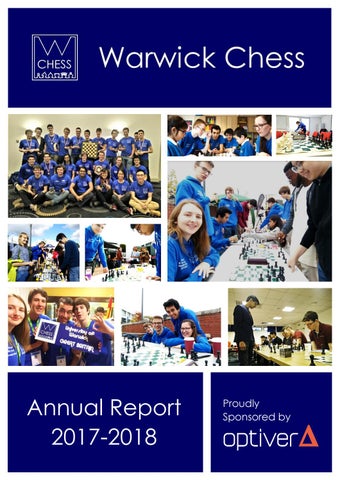 2017-18 Numbers! Year in in Summary! The University of Warwick Chess Society has had remarkable success this year 2017-18. We have proved again that we are the strongest University in the country (winning the British University Chess Championships) and one of the strongest in Europe (achieving 10th place at the European University Chess Championships)! Aside from our huge competitive successes, we have had a thriving calendar of events â&#x20AC;&#x201C; inviting super GM Anish Giri for a Simultaneous Display, running our Inaugural Warwick University Rapidplay, and regular Clubnights â&#x20AC;&#x201C; which have sustained our membership growth, as well as more volunteers and opportunities for our members than ever. Many thanks to Jack Huffer (President 2017-18), the Executive team, our members, and our sponsor, Optiver, for making this all possible!

Freshers’ Fortnight – Engaging New Members! Over Freshers’ Fortnight, we gave out over 3,000 Society flyers, and a range of Optiver flyers. We set up stands outside the SU and displayed our Society promotional video on the Piazza screen, engaging with new members and freshers. The Society is the largest university chess society in the country – managing to field the most teams to the British Universities’ Chess Team Championships for both 2016-17 and 2017-18.

Weekly Clubnights, Tournaments, and Socials Our weekly Thursday clubnights (7.30-10pm) in the Universityâ&#x20AC;&#x2122;s Oculus Building have been very successful. We run a mix of blitz and exchange chess tournaments during and outside of Clubnights, as well as the Beginnersâ&#x20AC;&#x2122; Course, the ChessTalks Speaker Series, and online match fixtures with other universities! We also organise a range of non-alcoholic and alcoholic socials for members, including attending London Chessboxing events.

Competitive Chess – CDCL, 2020, BUCA, EUSA The 2017-18 season was a very successful year for competitive chess at the Society. In the Coventry and District Chess (CDCL) League, we ran five teams playing every week, giving the opportunity for beginners to titled masters to represent the University of Warwick. We successfully defended our CDCL titles, winning both Division 1 and 3! At the 2020 Rapidplay, we came a respectable joint 3rd Grand Final. As the 2017 British Universities’ Chess (BUCA) Champions, we represented Great Britain at the European Champions in September 2017 - with our top team proudly coming 10th. This February, we successful repeated our 2017 success at BUCA – fielding six teams, and defending our titles as BUCA Champions - winning Division 1, 2, 4 and runner-up in Division 3.

Optiver Partnership, & Simultaneous Display with Anish Giri Our exclusive partnership with Optiver stretching over 2 years, have been very successful! Optiver’s support and sponsorship have thoroughly facilitated our success - allowing us to field a record number of teams across several Leagues and tournaments, engage more new members with more promotional materials (flyers, banner stands, etc), as well as organising the Society’s first ECF and FIDE-rated Rapidplay chess tournament. At every opportunity, we have promoted Optiver’s graduate opportunities and distributed Optiver’s flyers / pens / Rubrics cubes. We have proudly featured Optiver’s logo on all our players’ and school volunteers’ T-shirts and Exec hoodies over the last two years. Our most successful event with Optiver, was undoubtedly the Simultaneous Display with Grandmaster Anish Giri – the current World No.15 Super Grandmaster!

Warwick University Rapidplay Tournament (ECF & FIDE-rated) This year, the Society organised its first Warwick University Rapidplay Tournament, which was both ECF (English Chess Federation) and FIDE (World Chess Federation) rated. The inaugural event was great success; we had fifty-three participants of all ages across two sections. The players hailed from Coventry, Solihull, Leamington, Coventry University, the University of Bath, and the University of Loughborough â&#x20AC;&#x201C; some from as far and wide as Bulgaria, Turkey, and Australia! Special thanks go to Warwick postgraduate and the ECF Manager of Arbiters, Thomas Thorpe for serving as our Chief Arbiter.

Warwick Chess in Schools and Academies The Society prides itself in its outreach work and links with the local community, we strongly encourage our members to go into schools and academies to coach chess. We have great links with the Coventry Chess Academy (CCA) where members volunteer every Saturday morning; in the past, former Society President David Oâ&#x20AC;&#x2122;Neill, served concurrently as CCA Assistant Director. We also coach chess every Friday at Grange Farm Primary School; at present, we are developing new links with local schools and elderly peopleâ&#x20AC;&#x2122;s care homes. Special thanks go to Warwick Volunteers and Optiver, for their support towards our outreach activities! 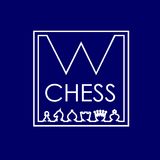