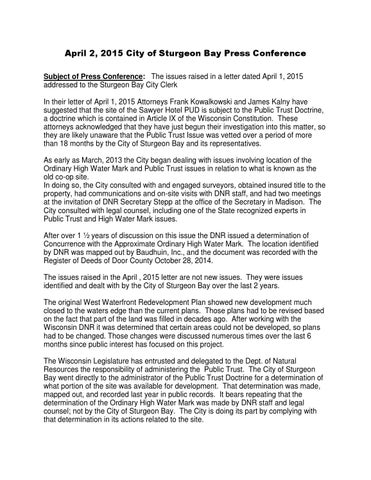 April 2, 2015 City of Sturgeon Bay Press Conference Subject of Press Conference: The issues raised in a letter dated April 1, 2015 addressed to the Sturgeon Bay City Clerk In their letter of April 1, 2015 Attorneys Frank Kowalkowski and James Kalny have suggested that the site of the Sawyer Hotel PUD is subject to the Public Trust Doctrine, a doctrine which is contained in Article IX of the Wisconsin Constitution. These attorneys acknowledged that they have just begun their investigation into this matter, so they are likely unaware that the Public Trust Issue was vetted over a period of more than 18 months by the City of Sturgeon Bay and its representatives. As early as March, 2013 the City began dealing with issues involving location of the Ordinary High Water Mark and Public Trust issues in relation to what is known as the old co-op site. In doing so, the City consulted with and engaged surveyors, obtained insured title to the property, had communications and on-site visits with DNR staff, and had two meetings at the invitation of DNR Secretary Stepp at the office of the Secretary in Madison. The City consulted with legal counsel, including one of the State recognized experts in Public Trust and High Water Mark issues. After over 1 Â˝ years of discussion on this issue the DNR issued a determination of Concurrence with the Approximate Ordinary High Water Mark. The location identified by DNR was mapped out by Baudhuin, Inc., and the document was recorded with the Register of Deeds of Door County October 28, 2014. The issues raised in the April , 2015 letter are not new issues. They were issues identified and dealt with by the City of Sturgeon Bay over the last 2 years. The original West Waterfront Redevelopment Plan showed new development much closed to the waters edge than the current plans. Those plans had to be revised based on the fact that part of the land was filled in decades ago. After working with the Wisconsin DNR it was determined that certain areas could not be developed, so plans had to be changed. Those changes were discussed numerous times over the last 6 months since public interest has focused on this project. The Wisconsin Legislature has entrusted and delegated to the Dept. of Natural Resources the responsibility of administering the Public Trust. The City of Sturgeon Bay went directly to the administrator of the Public Trust Doctrine for a determination of what portion of the site was available for development. That determination was made, mapped out, and recorded last year in public records. It bears repeating that the determination of the Ordinary High Water Mark was made by DNR staff and legal counsel; not by the City of Sturgeon Bay. The City is doing its part by complying with that determination in its actions related to the site. 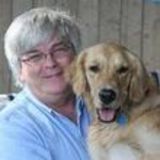