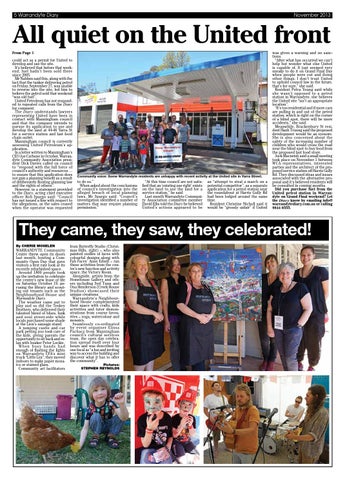 All quiet on the United front From Page 1 could act as a permit for United to develop and use the site. It’s believed that before that weekend, fuel hadn’t been sold there since 2005. Mr Nabben said this, along with the fact that the tanker delivering petrol on Friday, September 27, was unable to reverse into the site, led him to believe the petrol sold that weekend “was old fuel”. United Petroleum has not responded to repeated calls from the Diary for comment. The Diar y understands lawyers representing United have been in contact with Manningham council and that the company intends to pursue its application to use and develop the land at 44-46 Yarra St for a service station and fast food chain outlet. Manningham council is currently assessing United Petroleum’s application. In a letter written to Manningham’s CEO Joe Carbone in October, Warrandyte Community Association president Dick Davies called on council to “respond with the full force of council’s authority and resources … to ensure that this application does not gain a planning benefit as a result of deliberately flouting planning law and the rights of others”. However, in a statement provided to the Diary, acting chief executive officer Rob Spargo said: “Council has not issued a fine with respect to the allegations, as the sales ceased when the operator was requested

Community voice: Some Warrandyte residents are unhappy with recent activity at the United site in Yarra Street.

“At this time council are not satisfied that an ‘existing use right’ exists on the land to use the land for a service station,” he said. Last month Warrandyte Community Association committee member David Ellis told the Diary he believed United’s actions appeared to be

an “attempt to steal a march on a potential competitor”, as a separate application for a petrol station near the roundabout at Harris Gully Rd had been lodged around the same time. Resident Christine Nicholl said it would be “grossly unfair” if United

was given a warning and no sanctions. “After what has occurred we can’t help but wonder what else United is capable of. It just seemed very sneaky to do it on Grand Final Day when people were out and doing other things. I don’t trust United to uphold council law in the future, that’s for sure,” she said. Resident Petra Young said while she wasn’t opposed to a petrol station in Warrandyte, she believes the United site “isn’t an appropriate location”. “It’s too residential and if more cars are pulling in and out of the petrol station, which is right on the corner of a blind spot, there will be more accidents,” she said. Meanwhile, Brackenbury St resident Hanh Truong said the proposed development would be an eyesore. She is also concerned about the safety of the increasing number of children who would cross the road near the blind spot to buy food from the proposed fast food store. Jock Macneish said a small meeting took place on November 1 between WCA representatives, interested parties and the architect of the proposed service station off Harris Gully Rd. They discussed ideas and issues associated with the alternative proposal and it’s believed residents will be consulted in coming months. Did you purchase fuel from the United petrol station in Warrandyte on Grand Final weekend? Let the Diary know by emailing info@ warrandytediary.com.au or calling 9844 0555.

They came, they saw, they celebrated! By Cherie Moselen

WARRANDYTE Community Centre threw open its doors last month, hosting a Community Open Day that gave visitors a first rate look at its recently refurbished space. Around 1800 people took up the invitation to celebrate the centre’s new lease of life on Saturday October 19, perusing the library and scouting out tenants such as the Neighbourhood House and Warrandyte Diary. The weather came out to play and so did the Teskey Brothers, who delivered their talented blend of blues, funk and soul street-side while locals purchased some shade at the Lion’s sausage stand. A jumping castle and car park petting zoo took care of the kids, giving parents the opportunity to sit back and relax with busker Peter Lockie. When busy hands had enough of flashing the lights on Warrandyte CFA’s mini truck “Little Lex”, they moved indoors to make paper mosaics or stained glass. Community art facilitators

from Butterfly Studio (Christmas Hills, right) – who also painted oodles of faces with colourful designs along with Fab Faces’ Anne Edsell – ran these activities from the centre’s new function and activity space, the Victory Room. Alongside, artists from the Stonehouse Gallery and others including Syd Tunn and Ona Henderson (Creek House Studios) showcased their unique creations. Warrandyte’s Neighbourhood House complemented their space with crafts, kids activities and tutor demonstrations from course favourites – yoga, watercolour and mosaics. Seamlessly co-ordinated by event organiser Elissa Pachacz from Manningham council’s cultural services team, the open day celebration spread itself over four hours and was described by one local as “a fun and inviting way to access the building and discover what it has to offer the community”.

November 2013 edition of the Warrandyte Diary