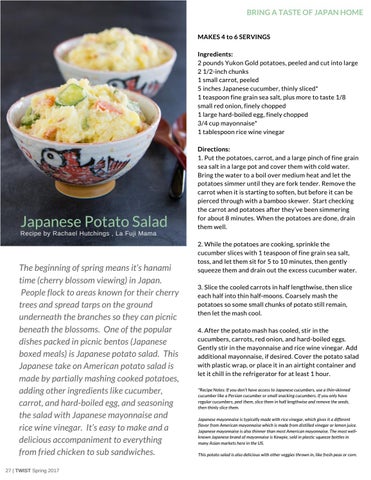 The beginning of spring means it’s hanami time (cherry blossom viewing) in Japan.  People flock to areas known for their cherry trees and spread tarps on the ground underneath the branches so they can picnic beneath the blossoms.  One of the popular dishes packed in picnic bentos (Japanese boxed meals) is Japanese potato salad.  This Japanese take on American potato salad is made by partially mashing cooked potatoes, adding other ingredients like cucumber, carrot, and hard-boiled egg, and seasoning the salad with Japanese mayonnaise and rice wine vinegar.  It’s easy to make and a delicious accompaniment to everything from fried chicken to sub sandwiches. 27 | TWIST Spring 2017

Directions: 1. Put the potatoes, carrot, and a large pinch of fine grain sea salt in a large pot and cover them with cold water. Bring the water to a boil over medium heat and let the potatoes simmer until they are fork tender. Remove the carrot when it is starting to soften, but before it can be pierced through with a bamboo skewer. Start checking the carrot and potatoes after they’ve been simmering for about 8 minutes. When the potatoes are done, drain them well. 2. While the potatoes are cooking, sprinkle the cucumber slices with 1 teaspoon of fine grain sea salt, toss, and let them sit for 5 to 10 minutes, then gently squeeze them and drain out the excess cucumber water. 3. Slice the cooled carrots in half lengthwise, then slice each half into thin half-moons. Coarsely mash the potatoes so some small chunks of potato still remain, then let the mash cool.  4. After the potato mash has cooled, stir in the cucumbers, carrots, red onion, and hard-boiled eggs. Gently stir in the mayonnaise and rice wine vinegar. Add additional mayonnaise, if desired. Cover the potato salad with plastic wrap, or place it in an airtight container and let it chill in the refrigerator for at least 1 hour.  *Recipe Notes: If you don’t have access to Japanese cucumbers, use a thin-skinned cucumber like a Persian cucumber or small snacking cucumbers. If you only have regular cucumbers, peel them, slice them in half lengthwise and remove the seeds, then thinly slice them. Japanese mayonnaise is typically made with rice vinegar, which gives it a different flavor from American mayonnaise which is made from distilled vinegar or lemon juice. Japanese mayonnaise is also thinner than most American mayonnaise. The most wellknown Japanese brand of mayonnaise is Kewpie, sold in plastic squeeze bottles in many Asian markets here in the US. This potato salad is also delicious with other veggies thrown in, like fresh peas or corn. 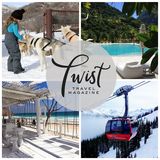 A new spin on modern family travel. Twist is a collaborative travel magazine published by a group of travel writers and family travel blogge...

A new spin on modern family travel. Twist is a collaborative travel magazine published by a group of travel writers and family travel blogge...