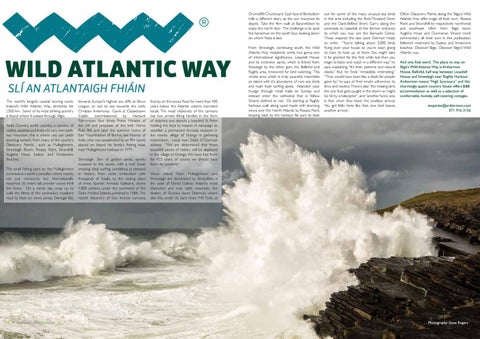 Drumcliffe Churchyard. Each face of Benbulben tells a different story as the sun traverses its slopes. Take the 4km walk at Baranribbon to enjoy the north face. The challenge is to spot the horseman on the south face, looking down on where Yeats is laid.

The world’s longest coastal touring route, Ireland’s Wild Atlantic Way, stretches for 2500 km. Some of its most striking scenery is found where it passes through Sligo. Yeats Country, surfer country, a country of castles, seasides and Ireland’s very own table top mountain; this is where you can catch stunning sunsets from many of the county’s Discovery Point’s , such as Mullaghmore, Streedagh Beach, Rosses Point, Strandhill, Aughris Head, Easkey and Enniscrone Beaches. The small fishing port on the Mullaghmore peninsula is a surfers paradise, where nearby not just rumoured, but internationally reported 20 metre tall prowler waves thrill the brave. On a windy day, wrap up to walk the 8kms of the peninsula’s headland road to feast on views across Donegal Bay

towards Europe’s highest sea cliffs at Slieve League, or out to sea towards the early Christian Innismuray. Gawk at Classiebawn Castle, commissioned by Viscount Palmerston, four times Prime Minister of the UK and proposer of the Irish Home Rule Bill, and later the summer home of Earl Mountbatten of Burma, last Viceroy of India, who was assassinated by an IRA bomb placed on board his family’s fishing boat, near Mullaghmore harbour in 1979. Streedagh, 3km of golden sands, openly exposed to the ocean, with a reef break creating ideal surfing conditions, is steeped in history; from rocks embedded with thousands of fossils, to the resting place of three Spanish Armada Galleons, where 1,800 soldiers, under the command of the Duke Medina Sidonia, perished in 1588. The recent discovery of four bronze cannons,

that lay on the ocean floor for more than 400 years below the Atlantic waters, marveled locals. The most elaborate of the cannons has two ornate lifting handles in the form of dolphins and depicts a bearded St Peter holding the keys to heaven. A campaign to establish a permanent Armada museum in the nearby village of Grange is gathering momentum. Local man, Eddie O`Gorman advises: “We are determined that these beautiful pieces of history will be displayed in the village of Grange. We have had them for 425 years, of course we should have them for posterity”.

From Streedagh, continuing south, the Wild Atlantic Way mistakenly omits two gems; one of international significance, Lissadell House and its extensive sands, which is linked from Steedagh by the other gem, the Ballinful and Raghly area, renowned for bird watching. This whole area, which is truly peaceful, resembles an island with it’s abundance of rare sea birds and hush hush surfing spots. Abandon your trudge through retail malls on Sunday and instead enter the cathedral that is Yellow Strand, clothed or not. Or, starting at Raghly harbour, walk along quiet roads with stunning views over the North Atlantic to Rosses Point, looping back to the harbour. Be sure to look

out for some of the many unusual sea birds in this area including the Red-Throated Diver and the Dark-Bellied Brent. Carry along the peninsula to Lissadell, at the former entrance to which you may see the Barnacle Geese. These inspired the late poet Dermot Healy to write: “You’re talking about 3,000 birds flying over your house so you’re soon going to have to look up at them. You might take it for granted for the first while but then you begin to listen and watch in a different way,” he says, explaining: “It’s their patterns and natural clocks” that he finds “irresistibly interesting.” “They would have been like a clock for people gone by,” he says of their innate adherence to time and routine. There’s also “the missing bird, the one that gets caught in the storm or might be hit by a helicopter”, and “another funny one is that when they leave the swallow arrives. You get little hints like that, one bird leaves, another arrives”.

Other Discovery Points along the Sligo’s Wild Atlantic Way offer magic all their own. Rosses Point and Strandhill lie respectively northwest and southeast 10km from Sligo town. Aughris Head and Dunmoran Strand merit commentary all their own in this publication, followed westward by Easkey and Innsicrone beaches. Discover Sligo. Discover Sligo’s Wild Atlantic way And one final word. The place to stay on Sligo’s Wild Atlantic Way is Ardtarmon House, Ballinful, half way between Lissadell House and Streedagh near Raghly Harbour. Ardtarmon means “High Sanctuary” and this charmingly quaint country house offers B&B accommodation as well as a selection of comfortable, homely, self-catering cottages. enquiries@ardtarmon.com 071 916 3156

Views inland from Mullaghmore and Streedagh are dominated by Benbulben – the peak of Donal Gulben, Ireland’s most distinctive and only table mountain, the destiny of Grania’s lover, Diarmud, where also lies, under its bare head, WB Yeats, at