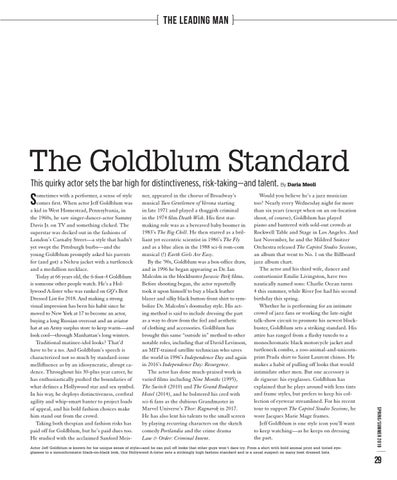 ner, appeared in the chorus of Broadway’s musical Two Gentlemen of Verona starting in late 1971 and played a thuggish criminal in the 1974 film Death Wish. His first starmaking role was as a bereaved baby boomer in 1983’s The Big Chill. He then starred as a brilliant yet eccentric scientist in 1986’s The Fly and as a blue alien in the 1988 sci-fi rom-com musical (!) Earth Girls Are Easy. By the ’90s, Goldblum was a box-office draw, and in 1996 he began appearing as Dr. Ian Malcolm in the blockbuster Jurassic Park films. Before shooting began, the actor reportedly took it upon himself to buy a black leather blazer and silky black button-front shirt to symbolize Dr. Malcolm’s doomsday style. His acting method is said to include dressing the part as a way to draw from the feel and aesthetic of clothing and accessories. Goldblum has brought this same “outside in” method to other notable roles, including that of David Levinson, an MIT-trained satellite technician who saves the world in 1996’s Independence Day and again in 2016’s Independence Day: Resurgence. The actor has done much-praised work in varied films including Nine Months (1995), The Switch (2010) and The Grand Budapest Hotel (2014), and he bolstered his cred with sci-fi fans as the dubious Grandmaster in Marvel Universe’s Thor: Ragnarok in 2017. He has also lent his talents to the small screen by playing recurring characters on the sketch comedy Portlandia and the crime drama Law & Order: Criminal Intent.

Would you believe he’s a jazz musician too? Nearly every Wednesday night for more than six years (except when on an on-location shoot, of course), Goldblum has played piano and bantered with sold-out crowds at Rockwell Table and Stage in Los Angeles. And last November, he and the Mildred Snitzer Orchestra released The Capitol Studio Sessions, an album that went to No. 1 on the Billboard jazz album chart. The actor and his third wife, dancer and contortionist Emilie Livingston, have two nautically named sons: Charlie Ocean turns 4 this summer, while River Joe had his second birthday this spring. Whether he is performing for an intimate crowd of jazz fans or working the late-night talk-show circuit to promote his newest blockbuster, Goldblum sets a striking standard. His attire has ranged from a flashy tuxedo to a monochromatic black motorcycle jacket and turtleneck combo, a zoo-animal-and-unicornprint Prada shirt to Saint Laurent chinos. He makes a habit of pulling off looks that would intimidate other men. But one accessory is de rigueur: his eyeglasses. Goldblum has explained that he plays around with lens tints and frame styles, but prefers to keep his collection of eyewear streamlined. For his recent tour to support The Capitol Studio Sessions, he wore Jacques Marie Mage frames. Jeff Goldblum is one style icon you’ll want to keep watching—as he keeps on dressing the part.

Actor Jeff Goldblum is known for his unique sense of style—and he can pull off looks that other guys won’t dare try. From a shirt with bold animal print and tinted eyeglasses to a monochromatic black-on-black look, this Hollywood A-lister sets a strikingly high fashion standard and is a usual suspect on many best dressed lists.

ometimes with a performer, a sense of style comes first. When actor Jeff Goldblum was a kid in West Homestead, Pennsylvania, in the 1960s, he saw singer-dancer-actor Sammy Davis Jr. on TV and something clicked. The superstar was decked out in the fashions of London’s Carnaby Street—a style that hadn’t yet swept the Pittsburgh burbs—and the young Goldblum promptly asked his parents for (and got) a Nehru jacket with a turtleneck and a medallion necklace. Today at 66 years old, the 6-foot-4 Goldblum is someone other people watch. He’s a Hollywood A-lister who was ranked on GQ’s Best Dressed List for 2018. And making a strong visual impression has been his habit since he moved to New York at 17 to become an actor, buying a long Russian overcoat and an aviator hat at an Army surplus store to keep warm—and look cool—through Manhattan’s long winters. Traditional matinee-idol looks? That’d have to be a no. And Goldblum’s speech is characterized not so much by standard-issue mellifluence as by an idiosyncratic, abrupt cadence. Throughout his 30-plus year career, he has enthusiastically pushed the boundaries of what defines a Hollywood star and sex symbol. In his way, he deploys distinctiveness, cerebral agility and whip-smart banter to project loads of appeal, and his bold fashion choices make him stand out from the crowd. Taking both thespian and fashion risks has paid off for Goldblum, but he’s paid dues too. He studied with the acclaimed Sanford Meis- 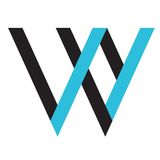