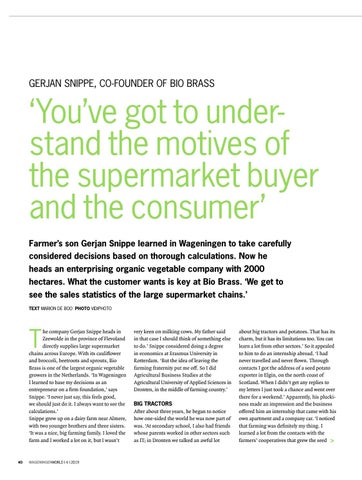 ‘You’ve got to under­ stand the motives of the supermarket buyer and the consumer’ Farmer’s son Gerjan Snippe learned in Wageningen to take carefully considered decisions based on thorough calculations. Now he heads an enterprising organic vegetable company with 2000 hectares. What the customer wants is key at Bio Brass. ‘We get to see the sales statistics of the large supermarket chains.’ TEXT MARION DE BOO PHOTO VIDIPHOTO

he company Gerjan Snippe heads in Zeewolde in the province of Flevoland directly supplies large supermarket chains across Europe. With its cauliflower and broccoli, beetroots and sprouts, Bio Brass is one of the largest organic vegetable growers in the Netherlands. ‘In Wageningen I learned to base my decisions as an ­entrepreneur on a firm foundation,’ says Snippe. ‘I never just say, this feels good, we should just do it. I always want to see the calculations.’ Snippe grew up on a dairy farm near Almere, with two younger brothers and three sisters. ‘It was a nice, big farming family. I loved the farm and I worked a lot on it, but I wasn’t

very keen on milking cows. My father said in that case I should think of something else to do.’ Snippe considered doing a degree in economics at Erasmus University in Rotterdam. ‘But the idea of leaving the ­farming fraternity put me off. So I did Agricultural Business Studies at the Agricultural University of Applied Sciences in Dronten, in the middle of farming country.’ BIG TRACTORS After about three years, he began to notice how one-sided the world he was now part of was. ‘At secondary school, I also had friends whose parents worked in other sectors such as IT; in Dronten we talked an awful lot

about big tractors and potatoes. That has its charm, but it has its limitations too. You can learn a lot from other sectors.’ So it appealed to him to do an internship abroad. ‘I had never travelled and never flown. Through contacts I got the address of a seed potato exporter in Elgin, on the north coast of Scotland. When I didn’t get any replies to my letters I just took a chance and went over there for a weekend.’ Apparently, his pluckiness made an impression and the business offered him an internship that came with his own apartment and a company car. ‘I noticed that farming was definitely my thing. I learned a lot from the contacts with the farmers’ cooperatives that grew the seed &gt;