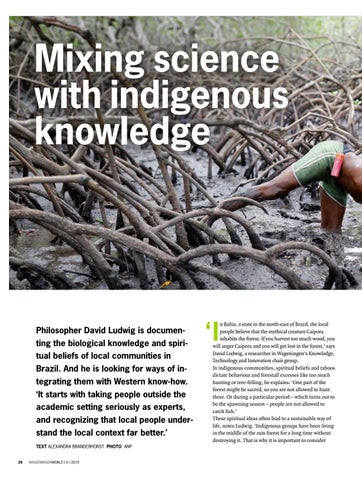 Philosopher David Ludwig is documenting the biological knowledge and spiritual beliefs of local communities in Brazil. And he is looking for ways of integrating them with Western know-how. ‘It starts with taking people outside the academic setting seriously as experts, and recognizing that local people understand the local context far better.’ TEXT ALEXANDRA BRANDERHORST PHOTO ANP 28

n Bahía, a state in the north-east of Brazil, the local people believe that the mythical creature Caipora ­inhabits the forest. If you harvest too much wood, you will anger Caipora and you will get lost in the forest,’ says David Ludwig, a researcher in Wageningen’s Knowledge, Technology and Innovation chair group. In indigenous communities, spiritual beliefs and taboos dictate behaviour and forestall excesses like too much hunting or tree-felling, he explains. ‘One part of the ­forest might be sacred, so you are not allowed to hunt there. Or during a particular period – which turns out to be the spawning season – people are not allowed to catch fish.’ These spiritual ideas often lead to a sustainable way of life, notes Ludwig. ‘Indigenous groups have been living in the middle of the rain forest for a long time without destroying it. That is why it is important to consider