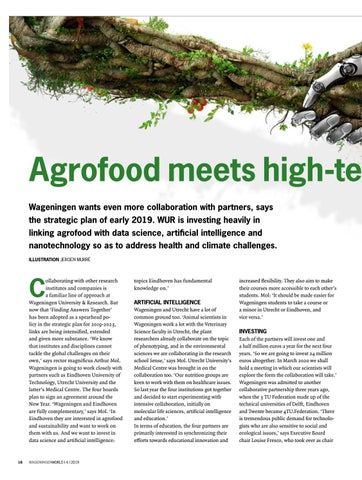 ollaborating with other research ­institutes and companies is a ­familiar line of approach at Wageningen University &amp; Research. But now that ‘Finding Answers Together’ has been adopted as a spearhead policy in the strategic plan for 2019-2023, links are being intensified, extended and given more s­ ubstance. ‘We know that institutes and ­disciplines cannot tackle the global ­challenges on their own,’ says rector magnificus Arthur Mol. Wageningen is going to work closely with partners such as Eindhoven University of Technology, Utrecht University and the latter’s Medical Centre. The four boards plan to sign an agreement around the New Year. ‘Wageningen and Eindhoven are fully ­complementary,’ says Mol. ‘In Eindhoven they are interested in agrofood and s­ ustainability and want to work on them with us. And we want to invest in data science and artificial i­ ntelligence:

topics Eindhoven has fundamental knowledge on.’ ARTIFICIAL INTELLIGENCE Wageningen and Utrecht have a lot of ­common ground too. ‘Animal scientists in Wageningen work a lot with the Veterinary Science faculty in Utrecht, the plant ­researchers already collaborate on the topic of phenotyping, and in the environmental sciences we are collaborating in the research school Sense,’ says Mol. Utrecht University’s Medical Centre was brought in on the ­collaboration too. ‘Our nutrition groups are keen to work with them on healthcare issues. So last year the four institutions got together and decided to start experimenting with ­intensive collaboration, initially on ­molecular life sciences, artificial intelligence and education.’ In terms of education, the four partners are primarily interested in synchronizing their efforts towards educational innovation and

increased flexibility. They also aim to make their courses more accessible to each other’s students. Mol: ‘It should be made easier for Wageningen students to take a course or a minor in Utrecht or Eindhoven, and vice versa.’ INVESTING Each of the partners will invest one and a half million euros a year for the next four years. ‘So we are going to invest 24 million euros altogether. In March 2020 we shall hold a meeting in which our scientists will explore the form the collaboration will take.’ Wageningen was admitted to another ­collaborative partnership three years ago, when the 3 TU Federation made up of the technical universities of Delft, Eindhoven and Twente became 4TU.Federation. ‘There is tremendous public demand for technologists who are also sensitive to social and ecological issues,’ says Executive Board chair Louise Fresco, who took over as chair