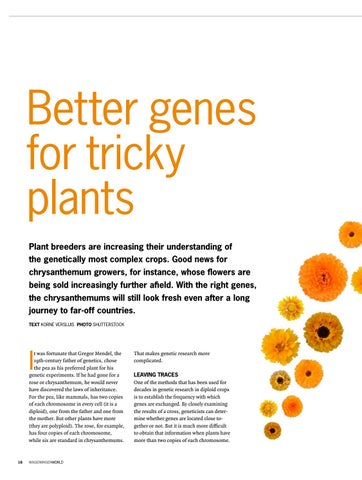 Better genes for tricky plants Plant breeders are increasing their understanding of the genetically most complex crops. Good news for chrysanthemum growers, for instance, whose flowers are being sold increasingly further afield. With the right genes, the chrysanthemums will still look fresh even after a long journey to far-off countries. TEXT KORNĂ&amp;#x2030; VERSLUIS PHOTO SHUTTERSTOCK

t was fortunate that Gregor Mendel, the 19th-century father of genetics, chose the pea as his preferred plant for his genetic experiments. If he had gone for a rose or chrysanthemum, he would never have discovered the laws of inheritance. For the pea, like mammals, has two copies of each chromosome in every cell (it is a diploid), one from the father and one from the mother. But other plants have more (they are polyploid). The rose, for example, has four copies of each chromosome, while six are standard in chrysanthemums.

That makes genetic research more complicated. LEAVING TRACES One of the methods that has been used for decades in genetic research in diploid crops is to establish the frequency with which genes are exchanged. By closely examining the results of a cross, geneticists can determine whether genes are located close together or not. But it is much more difficult to obtain that information when plants have more than two copies of each chromosome.