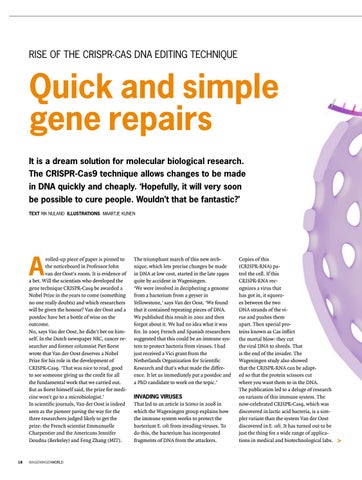 Quick and simple gene repairs It is a dream solution for molecular biological research. The CRISPR-Cas9 technique allows changes to be made in DNA quickly and cheaply. ‘Hopefully, it will very soon be possible to cure people. Wouldn’t that be fantastic?’ TEXT RIK NIJLAND ILLUSTRATIONS MAARTJE KUNEN

rolled-up piece of paper is pinned to the noticeboard in Professor John van der Oost’s room. It is evidence of a bet. Will the scientists who developed the gene technique CRISPR-Cas9 be awarded a Nobel Prize in the years to come (something no one really doubts) and which researchers will be given the honour? Van der Oost and a postdoc have bet a bottle of wine on the outcome. No, says Van der Oost, he didn&#39;t bet on himself. In the Dutch newspaper NRC, cancer researcher and former columnist Piet Borst wrote that Van der Oost deserves a Nobel Prize for his role in the development of CRISPR-Cas9. ‘That was nice to read, good to see someone giving us the credit for all the fundamental work that we carried out. But as Borst himself said, the prize for medicine won&#39;t go to a microbiologist.’ In scientific journals, Van der Oost is indeed seen as the pioneer paving the way for the three researchers judged likely to get the prize: the French scientist Emmanuelle Charpentier and the Americans Jennifer Doudna (Berkeley) and Feng Zhang (MIT).

The triumphant march of this new technique, which lets precise changes be made in DNA at low cost, started in the late 1990s quite by accident in Wageningen. ‘We were involved in deciphering a genome from a bacterium from a geyser in Yellowstone,’ says Van der Oost. ‘We found that it contained repeating pieces of DNA. We published this result in 2001 and then forgot about it. We had no idea what it was for. In 2005 French and Spanish researchers suggested that this could be an immune system to protect bacteria from viruses. I had just received a Vici grant from the Netherlands Organization for Scientific Research and that&#39;s what made the difference. It let us immediately put a postdoc and a PhD candidate to work on the topic.’ INVADING VIRUSES That led to an article in Science in 2008 in which the Wageningen group explains how the immune system works to protect the bacterium E. coli from invading viruses. To do this, the bacterium has incorporated fragments of DNA from the attackers.

Copies of this (CRISPR-RNA) patrol the cell. If this CRISPR-RNA recognizes a virus that has got in, it squeezes between the two DNA strands of the virus and pushes them apart. Then special proteins known as Cas inflict the mortal blow: they cut the viral DNA to shreds. That is the end of the invader. The Wageningen study also showed that the CRISPR-RNA can be adapted so that the protein scissors cut where you want them to in the DNA. The publication led to a deluge of research on variants of this immune system. The now-celebrated CRISPR-Cas9, which was discovered in lactic acid bacteria, is a simpler variant than the system Van der Oost discovered in E. coli. It has turned out to be just the thing for a wide range of applications in medical and biotechnological labs.