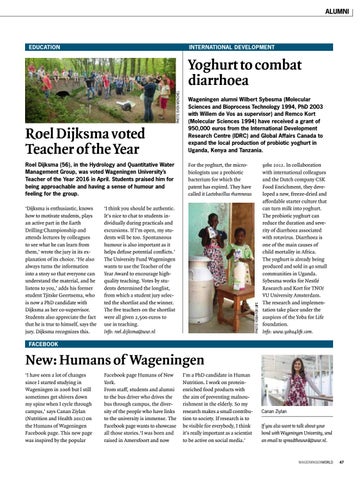 For the yoghurt, the micro­ biologists use a probiotic bacterium for which the patent has expired. They have called it Lactobacillus rhamnosus

‘I think you should be authentic. It’s nice to chat to students in­ dividually during practicals and excursions. If I’m open, my stu­ dents will be too. Spontaneous humour is also important as it helps defuse potential conflicts.’ The University Fund Wageningen wants to use the Teacher of the Year Award to encourage highquality teaching. Votes by stu­ dents determined the longlist, from which a student jury selec­ ted the shortlist and the winner. The five teachers on the shortlist were all given 2,500 euros to use in teaching. Info: roel.dijksma@wur.nl

‘Dijksma is enthusiastic, knows how to motivate students, plays an active part in the Earth Drilling Championship and attends lectures by colleagues to see what he can learn from them,’ wrote the jury in its ex­ planation of its choice. ‘He also always turns the information into a story so that everyone can understand the material, and he listens to you,’ adds his former student Tjitske Geertsema, who is now a PhD candidate with Dijksma as her co-supervisor. Students also appreciate the fact that he is true to himself, says the jury. Dijksma recognizes this.

Wageningen alumni Wilbert Sybesma (Molecular Sciences and Bioprocess Technology 1994, PhD 2003 with Willem de Vos as supervisor) and Remco Kort (Molecular Sciences 1994) have received a grant of 950,000 euros from the International Development Research Centre (IDRC) and Global Affairs Canada to expand the local production of probiotic yoghurt in Uganda, Kenya and Tanzania. yoba 2012. In collaboration with international colleagues and the Dutch company CSK Food Enrichment, they deve­ loped a new, freeze-dried and affordable starter culture that can turn milk into yoghurt. The probiotic yoghurt can reduce the duration and seve­ rity of diarrhoea associated with rotavirus. Diarrhoea is one of the main causes of child mortality in Africa. The yoghurt is already being produced and sold in 40 small communities in Uganda. Sybesma works for Nestlé Research and Kort for TNO/ VU University Amsterdam. The research and implemen­ tation take place under the auspices of the Yoba for Life foundation. Info: www.yoba4life.com.

New: Humans of Wageningen ‘I have seen a lot of changes since I started studying in Wageningen in 2006 but I still sometimes get shivers down my spine when I cycle through campus,’ says Canan Ziylan (Nutrition and Health 2011) on the Humans of Wageningen Facebook page. This new page was inspired by the popular

Facebook page Humans of New York. From staff, students and alumni to the bus driver who drives the bus through campus, the diver­ sity of the people who have links to the university is immense. The Facebook page wants to showcase all those stories.‘I was born and raised in Amersfoort and now

I’m a PhD candidate in Human Nutrition. I work on proteinenriched food products with the aim of preventing malnou­ rishment in the elderly. So my research makes a small contribu­ tion to society. If research is to be visible for everybody, I think it’s really important as a scientist to be active on social media.’

If you also want to talk about your bond with Wageningen University, send an email to spreadthewurd@wur.nl.