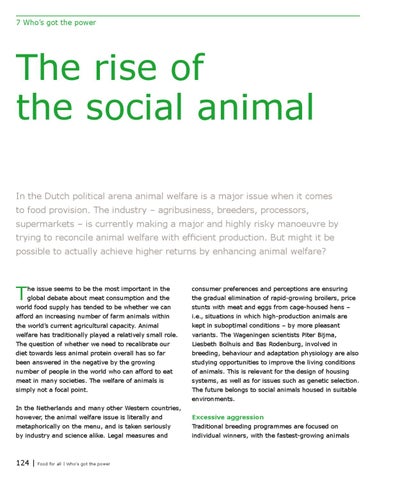 7 Who’s got the power

The rise of the social animal In the Dutch political arena animal welfare is a major issue when it comes to food provision. The industry – agribusiness, breeders, processors, super­markets – is currently making a major and highly risky manoeuvre by trying to reconcile animal welfare with efficient production. But might it be possible to actually achieve higher returns by enhancing animal welfare?

he issue seems to be the most important in the

consumer preferences and perceptions are ensuring

global debate about meat consumption and the

world food supply has tended to be whether we can

stunts with meat and eggs from cage-housed hens –

afford an increasing number of farm animals within

i.e., situations in which high-production animals are

The question of whether we need to recalibrate our

diet towards less animal protein overall has so far

been answered in the negative by the growing

of animals. This is relevant for the design of housing

meat in many societies. The welfare of animals is

systems, as well as for issues such as genetic selection.

simply not a focal point.

The future belongs to social animals housed in suitable environments.

In the Netherlands and many other Western countries, however, the animal welfare issue is literally and

metaphorically on the menu, and is taken seriously

Traditional breeding programmes are focused on

by industry and science alike. Legal measures and

individual winners, with the fastest-growing animals

Food for all | Who's got the power