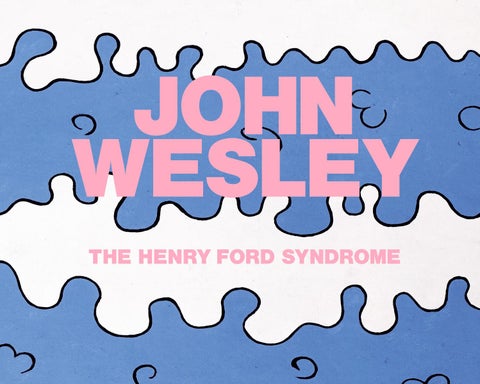 Despite John Wesley sharing his name with a famous English Methodist cleric, little has been written about what God thinks of the American painterâ&amp;#x20AC;&amp;#x2122;s work. The artist Bill Barrette has an illuminating anecdote, however. In a touching memoir of his friend and one-time-teacher titled Art, Love and Faith, Barrette describes the occasion, in the mid-1970s, when Wesley and his then partner, the writer Hannah Green, came across a reliquary statue of Sainte Foy in the treasury of a church in Conques, France. Both Green and Wesley underwent profound spiritual experiences, which led them to self-convert to Catholicism. Wesley eventually decided to be baptised, so he could celebrate communion. He approached the priest in Conques, who after some consideration refused, suggesting he do it back in the USA . Returning to New York, Wesley asked the

activist priest Daniel Berrigan if he would do it. Berrigan passed the matter on to the Greenwich Village parish and nothing ultimately came of it. “Undaunted,” writes Barrette, “Jack [John] and Hannah continued to celebrate communion with Sainte Foy and her mysterious world in their own unsanctioned but ecstatic way.” If we accept that art is a system of communion – one that requires a conceptual investment in its images, objects and principles – for this communion to function, its believers have to possess faith; they broadly need to agree on some basics. For instance, if you say your abstract painting is ‘about’ light and space, then I have to entertain that idea too in order for us to have a conversation about it. If an Important Art History Book tells you that, say, Pop Art was a reaction to postwar consumerism, media and mass culture, and that its adherents tend to make work that share a few identifiable characteristics, then for the sake of argument most of us go along with the theology expressed in the Important Art History Book. We have to accept baptism before we can celebrate communion together. I would be tempted to describe Wesley’s art as an “unsanctioned but ecstatic” take on Pop Art. ‘Unsanctioned’ not because Wesley is some sort of outsider art savant – he has had over 50 solo exhibitions since his 1963 debut at Robert Elkon Gallery in New York – but because his work seems unfettered by Pop’s established systems of faith. Like the work of his British contemporary Patrick Caulfield – who dealt in bright, flat colours, lonely still lifes and empty interiors given form by precise, economical draughtsmanship – Wesley’s shares formal similarities with a lot of Pop Art but they do not necessarily mean the same thing. Rather, it is a syncretic Pop, a Pop made ecstatic by the possibilities of Minimalism and Surrealism. (The curator Harald Szeemann, who included Wesley in Documenta 5, in Kassel, 1972, placed him amongst a group

of seemingly disparately related ‘Post-Pop’ artists, including Richard Artschwager, Chuck Close, and Gerhard Richter.) Wesley’s canvases and occasional painted objects (such as ‘Suitcase’, 1964–65) [cat. no.2] are all built from hard-edge planes of colour, a graphic style inspired by comic books, commercial illustration and printing techniques. This application of colour calls to mind the work of Pop artists such as Roy Lichtenstein, Wanda Pimentel or Tom Wesselmann, but where their palettes channel the electric zing of urban life and the kandy-kolored brightness of commercial advertising and mass media, Wesley’s appears muted. Primary colours appear only occasionally (the canary yellow border of ‘Sleep’, 1971 [cat. no.3], or the bright blues of the conspiratorial businessmen in ‘Counsel’, 1973 [cat. no.6], for example); more common are toxic pinks, peppermints, violets, and icy blues and whites. His colour combinations look like the cover of a neglected book left in direct sunlight for months; as if UV light has broken down the chemical bonds in the pigment, giving us a glimpse of what really makes up flirtatious reds, sunny yellows and happy-go-lucky blues. These colours are not trying to seduce you, but rather to get you to think about how youth or beauty fades, about how the enticements of the present can go off the boil. These flat colours give Wesley’s work a deadpan quality, one that dares you not to laugh at his rotating cast of animals, nudes, celebrities, slapstick stooges, and historical notables. Like all good jokes, there’s no fun in trying to explain Wesley’s humour because comedy is the purest form of empiricist enquiry. (As the old excuse goes for failing to recount a joke properly, “you had to be there.”) Wesley delights in a brand of absurdism that brings to mind the old Surrealist adage about “the chance encounter of an umbrella and a sewing machine on an operating table”: a comedy of the unexpected that

can lay in the shock of the weird detail, or the sense that it has been conjured from our unconscious. Sometimes it’s easy to make a guess at what Wesley’s driving at, such as the fleshy pink bulls rampaging through the air above a frilly pillow and duvet in ‘Bulls and Bed’ from 1986 [cat. no.13] – a psycho-sexual Freudian image if ever there was one. In other instances the meaning is less clear. The identical, rotund cyclists crammed onto tandem bikes in his ‘Tour de France’ (1974) look like unlikely competitors in the French multiple stage race. Instead they bring to mind the sorts of dreams in which you cannot run fast enough, because you’re stuck in mud, or a mysterious force is dragging you back – or because six other people are crammed onto your bicycle. And what’s going on with the seven moustachioed mourners in the 1976 painting ‘¿Quien Es?’ [cat. no.7], arranged like morbid barber shop singers around a shrouded corpse? ‘¿Quien Es?’ – who is? – the dead body? Whoever it is they’re wearing a preppy, teal-coloured pair of deck shoes to their own funeral. A moment of etiquette failure as acutely embarrassing as a dream in which you find yourself stark naked in public. Which brings us back to the colour palette again: it feels wrong in the way that dreams, or science-fiction, can present us with a defamiliarised version of our world, one in which some elements are the same but others are tweaked in ways that seem strange, or – ’scuse the pun – off-colour. A euphemism for being ‘off-colour’ might be ‘transgressive’, which could be applied to Wesley’s depiction of the female form. The colour of their skin is a plastic pink. Lips, nails, nipples, and genitals are rendered in distinct, darker corals or hot reds as if – disturbingly – they are separable parts of the body. Nudes populate his work in sometimes erotic ways; close-ups of body parts, such as in an ‘Untitled’ painting from 1978 showing a woman’s buttocks clad in tight-fitting white shorts [cat. no.8]. At other times they appear objectified, the paintings toying with sexual taboos: the woman who appears to be crammed into

‘Suitcase’, for example, or the woman in ‘Untitled’ (2011) [cat. no.20], composed in a way that suggests she’s being fellated by a bull. The critic Jonathan Griffin parses Wesley’s erotics neatly: “When John Wesley makes paintings of women, which he does very often, he makes paintings about men […] These are pictures of heterosexual male desire […] Wesley presses at the limits of what might be considered crass or misogynistic in order to show how those qualities are ingrained into popular culture, all the while never claiming to be immune to the weaknesses of the flesh himself.” And then there’s Marcel Proust. Or rather, seven identical Marcel Prousts stroking their chins and arrayed in a line, as if travelling past the viewer on a conveyor belt (‘Marcel Proust’, 1984) [cat. no.11]. Proust is one of Wesley’s ensemble actors, appearing in his paintings along with Rudyard Kipling, Elizabeth Taylor, George Washington, and the cartoon characters Bumstead and Utamaro. Where other Pop artists of the 1960s and ’70s might have chosen to depict movie stars and fashion models, or thrilling symbols of the here-and-now – fast cars, fighter jets, vacuum cleaners, tinned foods – Wesley gives us a 19th century French novelist. Why Proust? Perhaps the clue is in the recurrence of Prousts. If we look to the writer’s literary masterpiece, In Search of Lost Time (1913–27), for clues, then his central theme of involuntary memory might tempt us to try and think of Wesley’s painting as a meditation on how our memories get distilled into single images: we can rarely explore the entirety of an episode from our lives, only recall particular snapshot moments of vision, sound, and smell. Perhaps it’s because the painting is based on one of the most famous photographs of the French author repeated ad nauseam – in a sense, it’s channelling a collective idea of Proust, rather than a specific, individual one. Or it could be that Wesley is giving us a distillation of Proust: what is the most Proust-y thing you can think of about Proust (apart from the famous memory trigger, the madeleine, that appears in his book)? It’s the

centre-parted hairstyle, the round, doleful eyes, the moustache and that pensive pose. Wesley depicts a Minimalist Proust – Proust reduced to the essentials – itself a gag, given that In Search of Lost Time stretches to seven long volumes. The punk poet and singer Mark E. Smith once identified “the three ‘R’s” not as reading, writing and arithmetic, but as “repetition, repetition, repetition.” It’s a tenet easily applied to Wesley’s work, one that aligns him with Minimalism. (His friend, the minimalist sculptor Donald Judd, included Wesley in the permanent collection at the Chinati Foundation in Marfa, Texas.) Repeated motifs can be found throughout Wesley’s work – dream archetypes, historical figures, or everyday objects. In some paintings, repeated human figures look like Busby Berkeley dancers performing a spectacularly symmetrical choreography. There are body doubles and perhaps, far more ominously, doppelgängers too. (Sighting one’s own doppelgänger, or ‘fetch’, is a harbinger of death.) In others, animals are duplicated and arranged across the canvas in compositions that appear heraldic, or at least suggest a high degree of codification, as if they hold emblematic significance to the members of a secret society. Yet Wesley’s minimalism seems less connected to the formal enquiries of his peers such as Judd, Dan Flavin, or Robert Morris and their drives towards an abstract purity of form or gestalt experience, and more in keeping with the musical minimalism of Steve Reich or Philip Glass, in whose compositions repeated motifs are put through multiple variations, subtly recombined with different rhythmic and harmonic emphases. “Repetition, repetition, repetition.” Smith’s Fordian philosophy is as funny as it is serious. As Wesley himself put it: “If you say foot foot foot foot foot foot foot foot foot long enough then foot becomes hilarious… If you paint 40 Nixons it puts Nixon in his place.” In that sense, repetition is one of comedy’s

most serious critical tools, which puts Wesley in the same tradition not just of Pop artists, Minimalists and Surrealists but of groundbreaking comedians such as Andy Kaufman too. (Just watch Kaufman’s 1977 appearance on The Midnight Special singing the lyrics “I Trusted You” over and over again.) Some of the greatest artists of the past 100 years have been comedians, and Wesley is part of that tradition as much as he is an art historical one. In 1976, Wesley issued a ‘Critical Appraisal’ of his work, in which he stated: “Many people find my pictures funny which I rather enjoy. I think much of my intent is humor. Once someone close to me counseled me before I was to meet a journalist that I should take my work very seriously or pretend to take it very seriously or I might read in a newspaper someday that I was a jackass. Often the pictures are quite funny for me like everything is often funny but I endeavor to tak[e] them seriously as artists should so that none of us ever should read in a newspaper that really we are jackasses.” Unsanctioned but ecstatic. 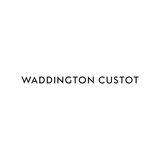