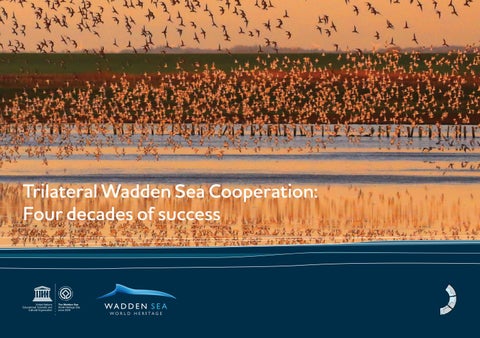 Forty years is a rather short time in historical terms, but the full significance of these four decades becomes evident against the background of the history of international environmental policy. The governments of Denmark, Germany and the Netherlands joined forces for the protection of the unique marine ecosystem at their doorstep in 1978. At that time, a mere six years after the United Nations Conference on the Human Environment (Stockholm, Sweden 1972), international and European environmental law were still at an incipient stage and most of the related international legal instruments – including the groundbreaking “Rio Conventions” derived from

the 1992 Earth summit – had not yet been developed. The founders of the TWSC, therefore, acted with remarkable foresight. No less remarkable is the fact that throughout the 40 years of its existence the Cooperation, which is not underpinned by any instrument of international law and based solely on the political will of the three Wadden Sea states, has continually set milestone after milestone along the road to a favourable conservation status for the Wadden Sea. This enabled the inscription of the area on the UNESCO World Heritage List. You will find some of these milestones outlined in this leaflet, which we hope you will find interesting and inspiring. Rüdiger Strempel Executive Secretary Common Wadden Sea Secretariat Preface 3

Trilateral Wadden Sea Cooperation: Four decades of success The Wadden Sea is an area of Outstanding Universal Value shared by three countries. Since 1978, Denmark, Germany and the Netherlands have cooperated to jointly protect and manage the Wadden Sea as an entity. Today, the Wadden Sea enjoys the highest level of protection through national parks and nature reserves for the benefit of present and future generations.

Designation of the Wadden Sea as PSSA under IMO

Development of a trilateral education strategy, “Shaping a Sustainable Tomorrow”

40th anniversary of the Cooperation, celebrated at the 13th Trilateral Governmental Conference in Leeuwarden

TMAP covers the entire Wadden Sea area and spans a broad range of parameters from physiological processes and population development to changes in landscape and morphology. It provides the basis for periodic scientific assessments of the ecosystem and an evaluation of progress towards the ecological targets set out in the Wadden Sea Plan.

Milestones of Science and Monitoring

tart of the Trilateral S Monitoring Project on Migratory Birds

The first QSR Synthesis Report is published, summarising the main results and recommendations for science, policy and management

The QSR is now published online at qsr.waddensea-worldheritage.org

TMAP revised in the framework of the HARBASINS project

Since 2009, the Wadden Sea World Heritage site has been on the UNESCO World Heritage List. It was inscribed for its globally unique geological and ecological values as well as for its biodiversity. The cooperation of Denmark, Germany and the Netherlands and designation of the entire Wadden Sea were a prerequisite for UNESCO and determined the road to achieving the World Heritage title.

Trilateral Governmental Conference, Schiermonnikoog, starts the nomination process for the Wadden Sea World Heritage in Germany and the Netherlands

With the inscription of sites on the World Heritage List, UNESCO aims to promote international collaboration between sites and countries. This philosophy has a long heritage in the Trilateral Wadden Sea Cooperation. It is also a necessity, because the protection of the Wadden Sea can only be ensured by addressing and adapting to global threats.

Children from the Wadden Sea take part in the Ocean Pledge of the UNESCO Marine World Heritage Programme at the UN Oceans Conference, New York (right)

The governments of Denmark, Germany and the Netherlands joined forces for the protection of the unique marine ecosystem at their doorstep in 1978 and formed the Trilateral Wadden Sea Cooperation. You will find some of its milestones outlined in this leaflet, which we hope you will find interesting and inspiring.