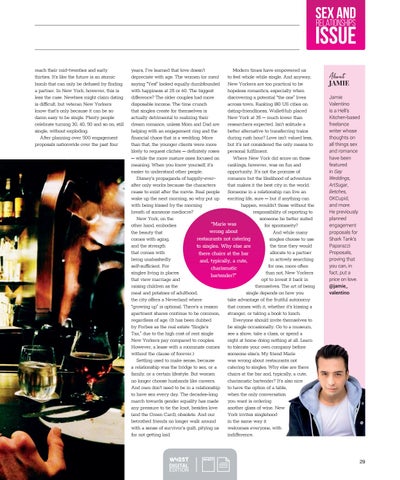 ISSUE reach their mid-twenties and early thirties. It’s like the future is an atomic bomb that can only be defused by finding a partner. In New York, however, this is less the case. Newbies might claim dating is difficult, but veteran New Yorkers know that’s only because it can be so damn easy to be single. Plenty people celebrate turning 30, 40, 50 and so on, still single, without exploding. After planning over 500 engagement proposals nationwide over the past four

years, I’ve learned that love doesn’t Modern times have empowered us depreciate with age. The women (or men) to feel whole while single. And anyway, saying “Yes!” looked equally dumbfounded New Yorkers are too practical to be with happiness at 25 or 60. The biggest hopeless romantics, especially when difference? The older couples had more discovering a potential “the one” lives disposable income. The time crunch across town. Ranking 180 US cities on that singles create for themselves is dating-friendliness, WalletHub placed actually detrimental to realizing their New York at 35 – much lower than dream romance, unless Mom and Dad are researchers expected. Isn’t solitude a helping with an engagement ring and the better alternative to transferring trains financial chaos that is a wedding. More during rush hour? Love isn’t valued less, than that, the younger clients were more but it’s not considered the only means to likely to request clichés – definitely roses personal fulfilment. – while the more mature ones focused on Where New York did score on those meaning. When you know yourself, it’s rankings, however, was on fun and easier to understand other people. opportunity. It’s not the promise of Disney’s propaganda of happily-everromance but the likelihood of adventure after only works because the characters that makes it the best city in the world. cease to exist after the movie. Real people Someone in a relationship can live an wake up the next morning, so why put up exciting life, sure – but if anything can with being kissed by the morning happen, wouldn’t those without the breath of someone mediocre? responsibility of reporting to New York, on the someone be better suited “Marie was other hand, embodies for spontaneity? wrong about the beauty that And while many restaurants not catering comes with aging, singles choose to use and the strength the time they would to singles. Why else are that comes with allocate to a partner there chairs at the bar being unabashedly in actively searching and, typically, a cute, self-sufficient. For for one, more often charismatic singles living in places than not, New Yorkers bartender?” that view marriage and opt to invest it back in raising children as the themselves. The art of being meat and potatoes of adulthood, single depends on how you the city offers a Neverland where take advantage of the fruitful autonomy “growing up” is optional. There’s a reason that comes with it, whether it’s kissing a apartment shares continue to be common, stranger, or taking a book to lunch. regardless of age. (It has been dubbed Everyone should invite themselves to by Forbes as the real estate “Single’s be single occasionally. Go to a museum, Tax,” due to the high cost of rent single see a show, take a class, or spend a New Yorkers pay compared to couples. night at home doing nothing at all. Learn However, a lease with a roommate comes to tolerate your own company before without the clause of forever.) someone else’s. My friend Marie Settling used to make sense, because was wrong about restaurants not a relationship was the bridge to sex, or a catering to singles. Why else are there family, or a certain lifestyle. But women chairs at the bar and, typically, a cute, no longer choose husbands like careers. charismatic bartender? It’s also nice And men don’t need to be in a relationship to have the option of a table, to have sex every day. The decades-long when the only conversation march towards gender equality has made you want is ordering any pressure to tie the knot, besides love another glass of wine. New (and the Green Card), obsolete. And our York invites singlehood betrothed friends no longer walk around in the same way it with a sense of survivor’s guilt, pitying us welcomes everyone, with for not getting laid. indifference.

Jamie Valentino is a Hell’s Kitchen-based freelance writer whose thoughts on all things sex and romance have been featured in Gay Weddings, ArtSugar, Betches, OKCupid, and more. He previously planned engagement proposals for Shark Tank’s Paparazzi Proposals, proving that you can, in fact, put a price on love. @jamie_ valentino

New York stories from a domme, a sub, and a photographic journey of sexual self-discovery. Adults only!

New York stories from a domme, a sub, and a photographic journey of sexual self-discovery. Adults only!