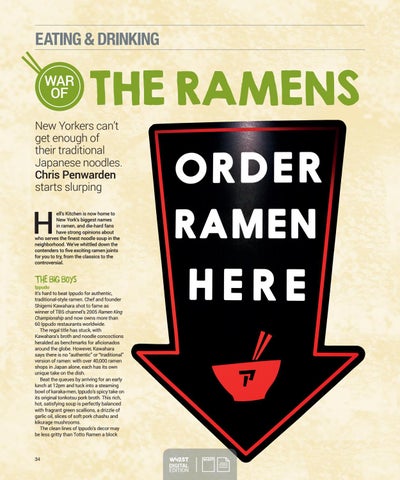 ell’s Kitchen is now home to New York’s biggest names in ramen, and die-hard fans have strong opinions about who serves the finest noodle soup in the neighborhood. We’ve whittled down the contenders to five exciting ramen joints for you to try, from the classics to the controversial.

Ippudo It’s hard to beat Ippudo for authentic, traditional-style ramen. Chef and founder Shigemi Kawahara shot to fame as winner of TBS channel’s 2005 Ramen King Championship and now owns more than 60 Ippudo restaurants worldwide. The regal title has stuck, with Kawahara’s broth and noodle concoctions heralded as benchmarks for aficionados around the globe. However, Kawahara says there is no “authentic” or “traditional” version of ramen: with over 40,000 ramen shops in Japan alone, each has its own unique take on the dish. Beat the queues by arriving for an early lunch at 12pm and tuck into a steaming bowl of karaka-men, Ippudo’s spicy take on its original tonkotsu pork broth. This rich, hot, satisfying soup is perfectly balanced with fragrant green scallions, a drizzle of garlic oil, slices of soft pork chashu and kikurage mushrooms. The clean lines of Ippudo’s decor may be less gritty than Totto Ramen a block