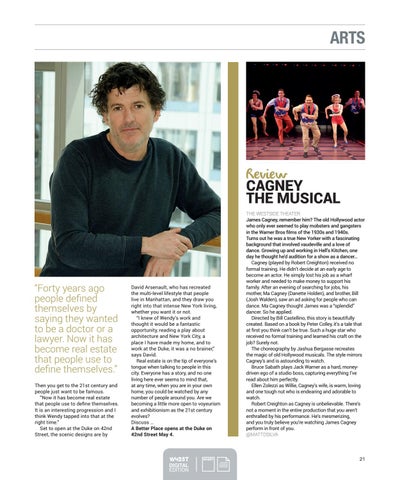 David Arsenault, who has recreated the multi-level lifestyle that people live in Manhattan, and they draw you right into that intense New York living, whether you want it or not. “I knew of Wendy’s work and thought it would be a fantastic opportunity, reading a play about architecture and New York City, a place I have made my home, and to work at the Duke, it was a no brainer,” says David. Real estate is on the tip of everyone’s tongue when talking to people in this city. Everyone has a story, and no one living here ever seems to mind that, at any time, when you are in your own home, you could be watched by any number of people around you. Are we becoming a little more open to voyeurism and exhibitionism as the 21st century evolves? Discuss … A Better Place opens at the Duke on 42nd Street May 4.

THE WESTSIDE THEATER James Cagney, remember him? The old Hollywood actor who only ever seemed to play mobsters and gangsters in the Warner Bros films of the 1930s and 1940s. Turns out he was a true New Yorker with a fascinating background that involved vaudeville and a love of dance. Growing up and working in Hell’s Kitchen, one day he thought he’d audition for a show as a dancer… Cagney (played by Robert Creighton) received no formal training. He didn’t decide at an early age to become an actor. He simply lost his job as a wharf worker and needed to make money to support his family. After an evening of searching for jobs, his mother, Ma Cagney (Danette Holden), and brother, Bill (Josh Walden), saw an ad asking for people who can dance. Ma Cagney thought James was a “splendid” dancer. So he applied. Directed by Bill Castellino, this story is beautifully created. Based on a book by Peter Colley, it’s a tale that at first you think can’t be true. Such a huge star who received no formal training and learned his craft on the job? Surely not. The choreography by Jashua Bergasse recreates the magic of old Hollywood musicals. The style mirrors Cagney’s and is astounding to watch. Bruce Sabath plays Jack Warner as a hard, moneydriven ego of a studio boss, capturing everything I’ve read about him perfectly. Ellen Zolezzi as Willie, Cagney’s wife, is warm, loving and one tough nut who is endearing and adorable to watch. Robert Creighton as Cagney is unbelievable. There’s not a moment in the entire production that you aren’t enthralled by his performance. He’s mesmerizing, and you truly believe you’re watching James Cagney perform in front of you. @MATTDSILVA