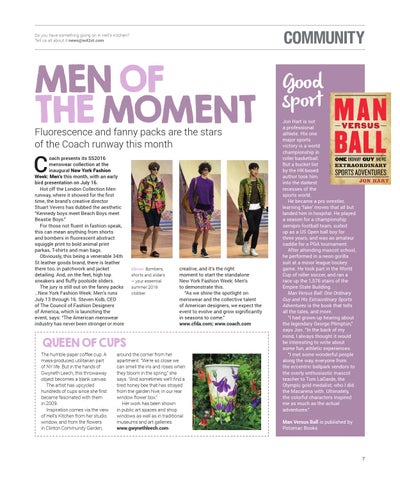 Do you have something going on in Hell’s Kitchen? Tell us all about it news@w42st.com

oach presents its SS2016 menswear collection at the inaugural New York Fashion Week: Men’s this month, with an early bird presentation on July 16. Hot off the London Collection Men runway, where it showed for the first time, the brand’s creative director Stuart Vevers has dubbed the aesthetic “Kennedy boys meet Beach Boys meet Beastie Boys.” For those not fluent in fashion speak, this can mean anything from shorts and bombers in fluorescent abstract squiggle print to bold animal print parkas, T-shirts and man bags. Obviously, this being a venerable 34th St leather goods brand, there is leather there too, in patchwork and jacket detailing. And, on the feet, high top sneakers and fluffy poolside sliders. The jury is still out on the fanny packs …New York Fashion Week: Men’s runs July 13 through 16. Steven Kolb, CEO of The Council of Fashion Designers of America, which is launching the event, says: “The American menswear industry has never been stronger or more

Above: Bombers, shorts and sliders – your essential summer 2016 clobber.

creative, and it’s the right moment to start the standalone New York Fashion Week: Men’s to demonstrate this. “As we shine the spotlight on menswear and the collective talent of American designers, we expect the event to evolve and grow significantly in seasons to come.” www.cfda.com; www.coach.com

QUEEN OF CUPS The humble paper coffee cup. A mass-produced, utilitarian part of NY life. But in the hands of Gwyneth Leech, this throwaway object becomes a blank canvas. The artist has upcycled hundreds of cups since she first became fascinated with them in 2009. Inspiration comes via the view of Hell’s Kitchen from her studio window, and from the flowers in Clinton Community Garden,

around the corner from her apartment. “We’re so close we can smell the iris and roses when they bloom in the spring,” she says. “And sometimes we’ll find a tired honey bee that has strayed from the garden hive, in our rear window flower box.” Her work has been shown in public art spaces and shop windows as well as in traditional museums and art galleries. www.gwynethleech.com

Good sport Jon Hart is not a professional athlete. His one major sports victory is a world championship in roller basketball. But a bucket list by the HK-based author took him into the darkest recesses of the sports world. He became a pro wrestler, learning ‘fake’ moves that all but landed him in hospital. He played a season for a championship semipro football team, suited up as a US Open ball boy for three years, and was an amateur caddie for a PGA tournament. After attending mascot school, he performed in a neon gorilla suit at a minor league hockey game. He took part in the World Cup of roller soccer, and ran a race up the 1,576 stairs of the Empire State Building. Man Versus Ball: One Ordinary Guy and HIs Extraordinary Sports Adventures is the book that tells all the tales, and more. “I had grown up hearing about the legendary George Plimpton,” says Jon. “In the back of my mind, I always thought it would be interesting to write about some fun, athletic experiences. “I met some wonderful people along the way, everyone from the eccentric ballpark vendors to the overly enthusiastic mascot teacher to Tom LaGarde, the Olympic gold medalist, who I did the Macarena with. Ultimately, the colorful characters inspired me as much as the actual adventures.” Man Versus Ball is published by Potomac Books

The free publication for Hell's Kitchen, New York. Celebrating the people, the food and the property – pick up a copy in your local retail s...

The free publication for Hell's Kitchen, New York. Celebrating the people, the food and the property – pick up a copy in your local retail s...