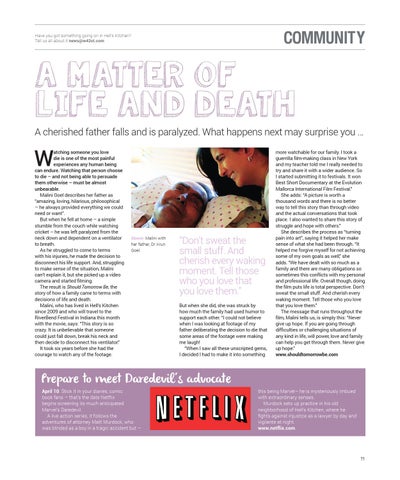 Have you got something going on in Hell’s Kitchen? Tell us all about it news@w42st.com

A MATTER OF LIFE AND DEATH

A cherished father falls and is paralyzed. What happens next may surprise you …

atching someone you love die is one of the most painful experiences any human being can endure. Watching that person choose to die – and not being able to persuade them otherwise – must be almost unbearable. Malini Goel describes her father as “amazing, loving, hilarious, philosophical – he always provided everything we could need or want”. But when he fell at home – a simple stumble from the couch while watching cricket – he was left paralyzed from the neck down and dependent on a ventilator to breath. As he struggled to come to terms with his injuries, he made the decision to disconnect his life support. And, struggling to make sense of the situation, Malini can’t explain it, but she picked up a video camera and started filming. The result is Should Tomorrow Be, the story of how a family came to terms with decisions of life and death. Malini, who has lived in Hell’s Kitchen since 2009 and who will travel to the RiverBend Festival in Indiana this month with the movie, says: “This story is so crazy. It is unbelievable that someone could just fall down, break his neck and then decide to disconnect his ventilator.” It took six years before she had the courage to watch any of the footage.

Above: Malini with her father, Dr Arun Goel.

“Don’t sweat the small stuff. And cherish every waking moment. Tell those who you love that you love them.” But when she did, she was struck by how much the family had used humor to support each other. “I could not believe when I was looking at footage of my father deliberating the decision to die that some areas of the footage were making me laugh! “When I saw all these unscripted gems, I decided I had to make it into something

April 10. Stick it in your diaries, comic book fans – that’s the date Netflix begins screening its much anticipated Marvel’s Daredevil. A live action series, it follows the adventures of attorney Matt Murdock, who was blinded as a boy in a tragic accident but –

more watchable for our family. I took a guerrilla film-making class in New York and my teacher told me I really needed to try and share it with a wider audience. So I started submitting it to festivals. It won Best Short Documentary at the Evolution Mallorca International Film Festival.” She adds: “A picture is worth a thousand words and there is no better way to tell this story than through video and the actual conversations that took place. I also wanted to share this story of struggle and hope with others.” She describes the process as “turning pain into art”, saying it helped her make sense of what she had been through. “It helped me forgive myself for not achieving some of my own goals as well,” she adds. “We have dealt with so much as a family and there are many obligations so sometimes this conflicts with my personal and professional life. Overall though, doing the film puts life is total perspective. Don’t sweat the small stuff. And cherish every waking moment. Tell those who you love that you love them.” The message that runs throughout the film, Malini tells us, is simply this: “Never give up hope. If you are going through difficulties or challenging situations of any kind in life, will power, love and family can help you get through them. Never give up hope.” www.shouldtomorrowbe.com

this being Marvel– he is mysteriously imbued with extraordinary senses. Murdock sets up practice in his old neighborhood of Hell’s Kitchen, where he fights against injustice as a lawyer by day and vigilante at night. www.netflix.com

The free publication for Hell's Kitchen, New York. Celebrating the people, the food and the property – pick up a physical edition in your lo...

The free publication for Hell's Kitchen, New York. Celebrating the people, the food and the property – pick up a physical edition in your lo...