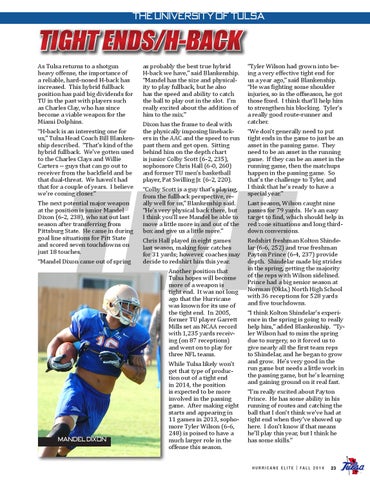 THE University of Tulsa

TIGHT ENDS/H-BACK As Tulsa returns to a shotgun heavy offense, the importance of a reliable, hard-nosed H-back has increased. This hybrid fullback position has paid big dividends for TU in the past with players such as Charles Clay, who has since become a viable weapon for the Miami Dolphins.

“H-back is an interesting one for us,” Tulsa Head Coach Bill Blankenship described. “That’s kind of the hybrid fullback. We’ve gotten used to the Charles Clays and Willie Carters -- guys that can go out to receiver from the backfield and be that dual-threat. We haven’t had that for a couple of years. I believe we’re coming closer.” The next potential major weapon at the position is junior Mandel Dixon (6-2, 238), who sat out last season after transferring from Pittsburg State. He came in during goal line situations for Pitt State and scored seven touchdowns on just 18 touches. “Mandel Dixon came out of spring

as probably the best true hybrid H-back we have,” said Blankenship. “Mandel has the size and physicality to play fullback, but he also has the speed and ability to catch the ball to play out in the slot. I’m really excited about the addition of him to the mix.”

Dixon has the frame to deal with the physically imposing linebackers in the AAC and the speed to run past them and get open. Sitting behind him on the depth chart is junior Colby Scott (6-2, 235), sophomore Chris Hall (6-0, 260) and former TU men’s basketball player, Pat Swilling Jr. (6-2, 220). “Colby Scott is a guy that’s playing, from the fullback perspective, really well for us,” Blankenship said. “He’s very physical back there, but I think you’ll see Mandel be able to move a little more in and out of the box and give us a little more.”

Chris Hall played in eight games last season, making four catches for 31 yards; however, coaches may decide to redshirt him this year. Another position that Tulsa hopes will become more of a weapon is tight end. It was not long ago that the Hurricane was known for its use of the tight end. In 2005, former TU player Garrett Mills set an NCAA record with 1,235 yards receiving (on 87 receptions) and went on to play for three NFL teams.

While Tulsa likely won’t get that type of production out of a tight end in 2014, the position is expected to be more involved in the passing game. After making eight starts and appearing in 11 games in 2013, sophomore Tyler Wilson (6-6, 248) is poised to have a much larger role in the offense this season.

“Tyler Wilson had grown into being a very effective tight end for us a year ago,” said Blankenship. “He was fighting some shoulder injuries, so in the offseason, he got those fixed. I think that’ll help him to strengthen his blocking. Tyler’s a really good route-runner and catcher.

“We don’t generally need to put tight ends in the game to just be an asset in the passing game. They need to be an asset in the running game. If they can be an asset in the running game, then the matchups happen in the passing game. So that’s the challenge to Tyler, and I think that he’s ready to have a special year.” Last season, Wilson caught nine passes for 79 yards. He’s an easy target to find, which should help in red zone situations and long thirddown conversions. Redshirt freshman Kolton Shindelar (6-6, 252) and true freshman Payton Prince (6-4, 237) provide depth. Shindelar made big strides in the spring, getting the majority of the reps with Wilson sidelined. Prince had a big senior season at Norman (Okla.) North High School with 36 receptions for 528 yards and five touchdowns.

“I think Kolton Shindelar’s experience in the spring is going to really help him,” added Blankenship. “Tyler Wilson had to miss the spring due to surgery, so it forced us to give nearly all the first team reps to Shindelar, and he began to grow and grow. He’s very good in the run game but needs a little work in the passing game, but he’s learning and gaining ground on it real fast. “I’m really excited about Payton Prince. He has some ability in his running of routes and catching the ball that I don’t think we’ve had at tight end when they’ve showed up here. I don’t know if that means he’ll play this year, but I think he has some skills.” HURRICANE ELITE