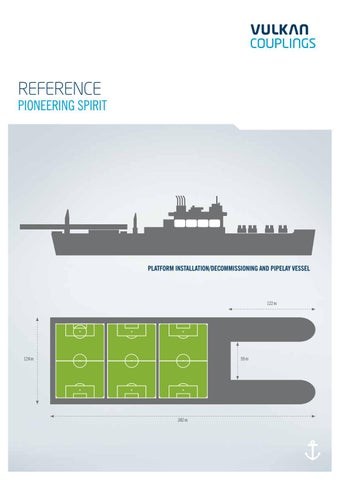 THE LARGEST SHIP IN THE WORLD WITH 21 RATO R COUPLINGS It took more than 25 years to design and build the largest construction vessel in the world. Now, in 2015, „Pioneering Spirit“, will enter into service. It is driven by nine MAN engines and twelve RollsRoyce thrusters, within which high-performance VULKAN RATO R ring couplings are used.

CHALLENGE The monumental ship was commissioned by the Swiss offshore services provider, Allseas Group. It comprises a twin hull construction with a length of 382 metres and width of 124 metres, and will be used in the offshore industry e.g. for installing and decommissioning platforms and laying pipes. The ship also has an immense maximum lifting capacity of 48,000 tonnes and stern portal cranes with a lifting capacity of 25,000 tonnes, as well as the world‘s largest pipelay capacity at 2,000 tonnes.

SOLUTION Eight MAN 20 cylinder 20V 32/44 CR V-engines and a nine cylinder 9L 32/44 CR in-line engine - comprising a total of 169 cylinders and a total power of 94.6 megawatts - power the electricity generators that meet the entire power demand on board the „Pioneering Spirit“. This also includes the diesel-electric propulsion and positioning system of the ship, which relies on twelve Rolls-Royce thrusters, each with a 5,500 kilowatt capacity and 360-degree rotation capability, enabling the fully loaded vessel to go at a speed of twelve knots. The engines also power the high-performance lifting gear, pipe laying equipment and other construction machinery, as well as further on-board power consuming systems, including a considerable hotel load for the 450-strong crew.

ADVANTAGES The RATO R is designed for use in installations where there is a demand for a high degree of torsional flexibility and misalignment capacity. During the design of the RATO R coupling, a strong focus was placed on thermal safety and efficient dynamic properties with minimal rotational inertias. Through the ability to choose from the available torsional rigidities and element designs, the optimal coordination of propulsion systems and gensets can be achieved. The flexibility of the RATO R coupling in a radial, axial and angular direction ensures a favourable balance in resiliently mounted engines with low restoring forces. Here, regardless of whether a thruster is equipped with an L-drive or a Z-Drive, VULKAN always provides the fitting solution.

It took more than 25 years to design and build the largest construction vessel in the world. Now, in 2015, „Pioneering Spirit“, will enter into service. It is driven by nine MAN engines and twelve Rolls-Royce thrusters, within which high-performance VULKAN RATO R ring couplings are used.