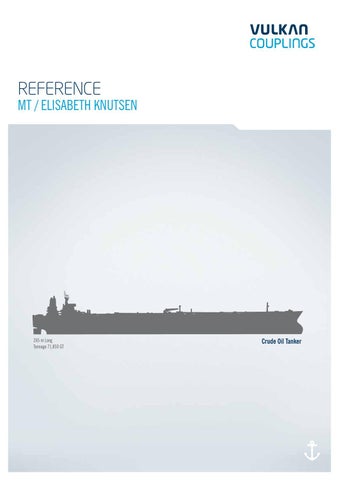 On the left: The link packages of the RATO S are lifted into the engine room by crane.

On the right: Finally it is done - two sets of two RATO S couplings are installed.

VULKAN Couplings supplies the largest RATO S for retrofitting the MT/Elisabeth Knutsen The MT/Elisabeth Knutsen has worked in the North Sea under the British flag for 15 years. The 265 m long crude oil tanker, with a tonnage of 71,850 GT (dead weight: 124,758 tons), was at the Remontowa shipyard in Danzig for retrofitting, among other things. The four torsionally flexible main drive couplings were replaced thereafter following 100,000 hours of operation.

The MT/Elisabeth Knutsen was docked for just three weeks in the shipyard at Danzig. Within this short time frame, apart from other repair and maintenance work, the couplings of the main drive also needed to be replaced. The service technicians responsible at VULKAN Couplings, was clear about the challenges faced by both him and his team: „The two couplings of the main drive that we had to disassemble first had a diameter of two metres each, and each of them a weight of 15 tons. With the constrained space conditions and the arrangement of the main drive and the generator, the disassembly was not an easy task and required accurate pre-planning.“ VULKAN Couplings and its five member service team did not only provide local support to the shipyard for this demanding upgrade alone; it was just one year earlier that the VULKAN engineers had made an accurate assessment of the situation in the engine room and were able to present a detailed concept for the execution to Mr. Harald Sandtorv at Knutsen, the superintendent who was responsible for the retrofitting.

The generator was situated directly over the couplings and had to be relocated completely as a starting point. For this purpose, a supporting structure was first welded together, which could hold the generator while the couplings were disassembled. Next, the VULKAN Couplings service team expanded all entry gaps into the engine room, so that the couplings could be pulled out with the help of a land-based crane after being disassembled of the propulsion system. VULKAN Couplings supplied 2x2 couplings of the largest size of the proven RATO S range as a replacement for the worn-out couplings: Two sets of two RATO S 733Y each now connect the two twostroke MAN engines (MAN B&W MDE 7 S 50 MC) with the Lohmann + Stolterfoht gearbox (GVG 50 / 225). The RATO S couplings are torsionally flexible elastomer couplings that compensate the radial, axial and angular displacements of the engines connected, protect the components against harmful vibrations, and ensure the maximum level of availability of the drive system.

Special benefit of the RATO S: The flexible elements are divided into several segments. On account of the highly constrained space for installation, this was a significant factor for the Knutsen Böyelaster V/KS shipping company. Based on the fact that the segments of the four RATO S couplings could be installed individually, the time required for repair and therefore idle times of the ship could be reduced and installation costs were minimised. „The exact planning of the rebuilding work, for which the experts from VULKAN were there to provide support right from the beginning, assured us that the technical difficult and time-intensive conversion could be implemented in the short time period designated. We were able to rely on the service team on-board one hundred per cent“, explained Mr. Harald Sandtorv.

From the perspective of the shipping company, VULKAN Couplings was characterised not only by the high level of certified functional quality of the couplings, but also by the competent organisation in advance and the close cooperation with the shipyard compared to its competitors.

Technical Data RATO S The highly flexible RATO S couplings are torsionally flexible elastomer couplings that compensate for the radial, axial and angular displacements of the machines connected. The couplings are available in a torque range of TKN = 12.50 to 800.00 kNm.