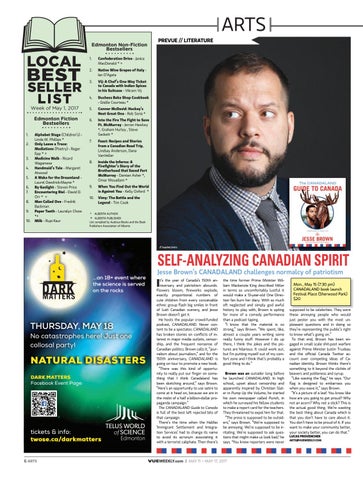 Vij: A Chef’s One-Way Ticket to Canada with Indian Spices in his Suitcase - Vikram Vij

Into the Fire The Fight to Save Ft. McMurray - Jerron Hawlwy *, Graham Hurley , Steve Sackett *

Inside the Inferno: A Firefighter’s Story of the Brotherhood that Saved Fort McMurray - Damian Asher *, Omar Mouallem *

When You Find Out the World is Against You - Kelly Oxford *

Vimy: The Battle and the Legend - Tim Cook

SELF-ANALYZING CANADIAN SPIRIT ...an 18+ event where the science is served on the rocks

THURSDAY, MAY 18 No catastrophes here! Just one collosal party!

t’s the year of Canada’s 150th anniversary and patriotism abounds. Flowers bloom, fireworks explode, exactly proportional numbers of cute children from every conceivable ethnic group flash big smiles in front of lush Canadian scenery, and Jesse Brown doesn’t get it. He hosts the popular crowd-funded podcast, CANADALAND. Never content to be a spectator, CANADALAND has broken stories on conflicts of interest in major media outlets, censorship, and the frequent nonsense of Canadian politics. Brown calls it, “journalism about journalism,” and for the 150th anniversary, CANADALAND is going on tour to promote a new book. “There was this kind of opportunity to really put our finger on something that I think Canadaland has been sketching around,” says Brown. “Here’s an opportunity to use satire to come at it head on, because we are in the midst of a half a billion-dollar propaganda campaign.” The CANADALAND Guide to Canada is full of the best left rejected bits of that campaign. There’s the time when the Halifax ‘Immigrant Settlement and Integration Services’ had to change its name to avoid its acronym associating it with a terrorist caliphate. Then there’s

the time former Prime Minister William Mackenzie King described Hitler in terms so uncomfortably lustful it would make a 13-year-old One Direction fan burn her diary. With so much oft neglected and simply god awful history to play with, Brown is opting for more of a comedy performance than a podcast taping. “I know that the material is so strong,” says Brown. “We spent, like, almost a couple years writing some really funny stuff. However I do up there, I think the jokes and the pictures are hilarious. It could work out, but I’m putting myself out of my comfort zone and I think that’s probably a good thing to do.” Brown was an outsider long before he launched CANADALAND. In high school, upset about censorship and apparently inspired by Christian Slater in Pump Up the Volume, he started his own newspaper called Punch, in which he surveyed his fellow students to make a report card for the teachers. They threatened to expel him for that. “The press is supposed to be outsiders,” says Brown. “We’re supposed to be annoying. We’re supposed to be irritating. We’re supposed to ask questions that might make us look bad," he says. "You know reporters were never

Mon., May 15 (7:30 pm) CANADALAND book launch Festival Place (Sherwood Park) $20 supposed to be celebrities. They were these annoying people who would just pester you with the most unpleasant questions and in doing so they’re representing the public’s right to know what’s going on.” To that end, Brown has been engaged in small scale shit-post warfare against Prime Minster Justin Trudeau and the official Canada Twitter account over competing ideas of Canadian identity. Brown thinks there’s something to it beyond the clichés of beavers and politeness and syrup. “Like waving the flag," he says. "Our flag is designed to embarrass you when you wave it,” says Brown. “It’s a picture of a leaf. You know like how are you going to get proud? Why not an acorn? Why not a stick? This is the actual good thing. We’re wasting the best thing about Canada which is that you don’t have to care about it. You don’t have to be proud of it. If you want to make your community better, your society better, you can do that.” LUCAS PROVENCHER 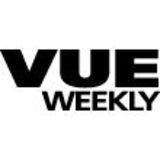