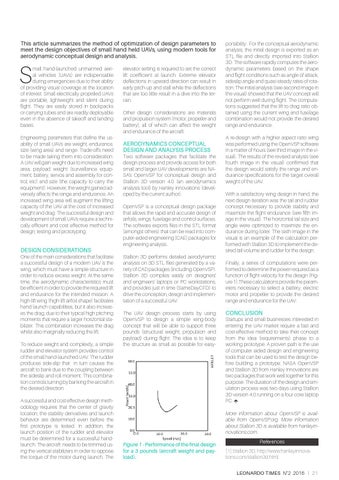 This article summarizes the method of optimization of design parameters to meet the design objectives of small hand held UAVs, using modern tools for aerodynamic conceptual design and analysis.

mall hand-launched unmanned aerial vehicles (UAVs) are indispensable during emergencies due to their ability of providing visual coverage at the location of interest. Small electrically propelled UAVs are portable, lightweight and silent during flight. They are easily stored in backpacks or carrying tubes and are readily deployable even in the absence of takeoff and landing bases. Engineering parameters that define the usability of small UAVs are weight, endurance, size (wing area) and range. Trade-offs need to be made taking them into consideration. A UAV will gain weight due to increased wing area, payload weight (surveillance equipment, battery, servos and assembly for control, etc) and size (the capacity to carry the equipment). However, the weight gained adversely affects the range and endurance. An increased wing area will augment the lifting capacity of the UAV at the cost of increased weight and drag. The successful design and development of small UAVs require a technically efficient and cost effective method for design, testing and prototyping.

elevator setting is required to set the correct lift coefficient at launch. Extreme elevator deflections in upward direction can result in early pitch-up and stall while the deflections that are too little result in a dive into the terrain. Other design considerations are materials and propulsion system (motor, propeller and battery), all of which can affect the weight and endurance of the aircraft.

AERODYNAMICS CONCEPTUAL DESIGN AND ANALYSIS PROCESS Two software packages that facilitate the design process and provide access for both small and larger UAV developments are NASAâ&#x20AC;&#x2122;s OpenVSP for conceptual design and Stallion 3D version 4.0 (an aerodynamics analysis tool) by Hanley innovations (developed by the current author). OpenVSP is a conceptual design package that allows the rapid and accurate design of airfoils, wings, fuselage and control surfaces. The software exports files in the STL format (amongst others) that can be read into computer-aided engineering (CAE) packages for engineering analysis.

To reduce weight and complexity, a simple rudder and elevator system provides control of the small hand-launched UAV. The rudder produces side-slip that in turn causes the aircraft to bank due to the coupling between the sideslip and roll moment. This combination controls turning by banking the aircraft in the desired direction. A successful and cost effective design methodology requires that the center of gravity location, the stability derivatives and launch behavior are determined even before the first prototype is tested. In addition, the launch position of the rudder and elevator must be determined for a successful handlaunch. The aircraft needs to be trimmed using the vertical stabilizers in order to oppose the torque of the motor during launch. The

Stallion 3D performs detailed aerodynamic analysis on 3D STL files generated by a variety of CAD packages (including OpenVSP). Stallion 3D compiles easily on designers' and engineers' laptops or PC workstations, and provides just in time (SameDayCFD) to drive the conception, design and implementation of a successful UAV. The UAV design process starts by using OpenVSP to design a simple wing-body concept that will be able to support three pounds (structural weight, propulsion and payload) during flight. The idea is to keep the structure as small as possible for easyHANLEY

One of the main considerations that facilitate a successful design of a modern UAV is the wing, which must have a simple structure in order to reduce excess weight. At the same time, the aerodynamic characteristics must be efficient in order to provide the required lift and endurance for the intended mission. A high-lift wing (high-lift airfoil shape) facilitates hand launch capabilities, but it also increases the drag, due to their typical high pitching moments that require a larger horizontal stabilizer. This combination increases the drag whilst also marginally reducing the lift.

portability . For the conceptual aerodynamic analysis, the initial design is exported as an STL file and directly imported into Stallion 3D. The software rapidly computes the aerodynamic parameters based on the shape and flight conditions such as angle of attack, sideslip angle and quasi-steady rates of rotation. The initial analysis (see second image in the visual) showed that the UAV concept will not perform well during flight. The computations suggested that the lift to drag ratio obtained using the current wing and fuselage combination would not provide the desired range and endurance. A re-design with a higher aspect ratio wing was performed using the OpenVSP software in a matter of hours (see third image in the visual). The results of the revised analysis (see fourth image in the visual) confirmed that the design would satisfy the range and endurance specifications for the target overall weight of the UAV. With a satisfactory wing design in hand, the next design iteration was the tail and rudder concept necessary to provide stability and maximize the flight endurance (see fifth image in the visual). The horizontal tail size and angle were optimized to maximize the endurance during loiter. The sixth image in the visual is an example of the calculation performed with Stallion 3D to implement the desired tail volume and rudder for the design. Finally, a series of computations were performed to determine the power required as a function of flight velocity for the design (Figure 1).These calculations provide the parameters necessary to select a battery, electric motor and propeller to provide the desired range and endurance for the UAV.

CONCLUSION Startups and small businesses interested in entering the UAV market require a fast and cost-effective method to take their concept from the idea (requirements) phase to a working prototype. A proven path is the use of computer aided design and engineering tools that can be used to test the design before building a prototype. NASA OpenVSP and Stallion 3D from Hanley Innovations are two packages that work well together for this purpose. The duration of the design and simulation process was two days using Stallion 3D version 4.0 running on a four core laptop PC. More information about OpenVSP is available from OpenVSP.org. More information about Stallion 3D is available from hanleyinnovations.com.

Figure 1 - Performance of the final design for a 3 pounds (aircraft weight and payload).