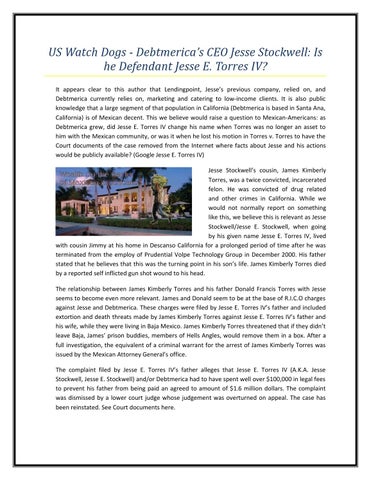 US Watch Dogs - Debtmerica’s CEO Jesse Stockwell: Is he Defendant Jesse E. Torres IV? It appears clear to this author that Lendingpoint, Jesse’s previous company, relied on, and Debtmerica currently relies on, marketing and catering to low-income clients. It is also public knowledge that a large segment of that population in California (Debtmerica is based in Santa Ana, California) is of Mexican decent. This we believe would raise a question to Mexican-Americans: as Debtmerica grew, did Jesse E. Torres IV change his name when Torres was no longer an asset to him with the Mexican community, or was it when he lost his motion in Torres v. Torres to have the Court documents of the case removed from the Internet where facts about Jesse and his actions would be publicly available? (Google Jesse E. Torres IV) Jesse Stockwell’s cousin, James Kimberly Torres, was a twice convicted, incarcerated felon. He was convicted of drug related and other crimes in California. While we would not normally report on something like this, we believe this is relevant as Jesse Stockwell/Jesse E. Stockwell, when going by his given name Jesse E. Torres IV, lived with cousin Jimmy at his home in Descanso California for a prolonged period of time after he was terminated from the employ of Prudential Volpe Technology Group in December 2000. His father stated that he believes that this was the turning point in his son’s life. James Kimberly Torres died by a reported self inflicted gun shot wound to his head. The relationship between James Kimberly Torres and his father Donald Francis Torres with Jesse seems to become even more relevant. James and Donald seem to be at the base of R.I.C.O charges against Jesse and Debtmerica. These charges were filed by Jesse E. Torres IV’s father and included extortion and death threats made by James Kimberly Torres against Jesse E. Torres IV’s father and his wife, while they were living in Baja Mexico. James Kimberly Torres threatened that if they didn’t leave Baja, James’ prison buddies, members of Hells Angles, would remove them in a box. After a full investigation, the equivalent of a criminal warrant for the arrest of James Kimberly Torres was issued by the Mexican Attorney General’s office. The complaint filed by Jesse E. Torres IV’s father alleges that Jesse E. Torres IV (A.K.A. Jesse Stockwell, Jesse E. Stockwell) and/or Debtmerica had to have spent well over $100,000 in legal fees to prevent his father from being paid an agreed to amount of $1.6 million dollars. The complaint was dismissed by a lower court judge whose judgement was overturned on appeal. The case has been reinstated. See Court documents here.