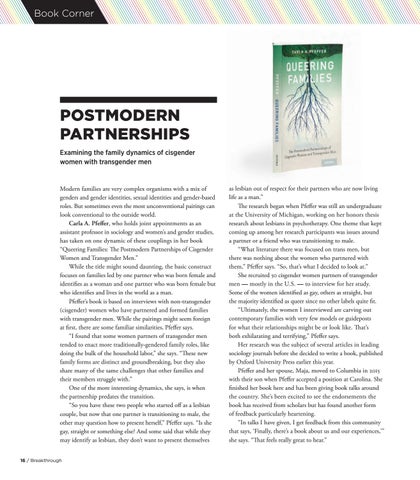 Modern families are very complex organisms with a mix of genders and gender identities, sexual identities and gender-based roles. But sometimes even the most unconventional pairings can look conventional to the outside world. Carla A. Pfeffer, who holds joint appointments as an assistant professor in sociology and women’s and gender studies, has taken on one dynamic of these couplings in her book “Queering Families: The Postmodern Partnerships of Cisgender Women and Transgender Men.” While the title might sound daunting, the basic construct focuses on families led by one partner who was born female and identifies as a woman and one partner who was born female but who identifies and lives in the world as a man. Pfeffer’s book is based on interviews with non-transgender (cisgender) women who have partnered and formed families with transgender men. While the pairings might seem foreign at first, there are some familiar similarities, Pfeffer says. “I found that some women partners of transgender men tended to enact more traditionally-gendered family roles, like doing the bulk of the household labor,” she says. “These new family forms are distinct and groundbreaking, but they also share many of the same challenges that other families and their members struggle with.” One of the more interesting dynamics, she says, is when the partnership predates the transition. “So you have these two people who started off as a lesbian couple, but now that one partner is transitioning to male, the other may question how to present herself,” Pfeffer says. “Is she gay, straight or something else? And some said that while they may identify as lesbian, they don’t want to present themselves 16 / Breakthrough

as lesbian out of respect for their partners who are now living life as a man.” The research began when Pfeffer was still an undergraduate at the University of Michigan, working on her honors thesis research about lesbians in psychotherapy. One theme that kept coming up among her research participants was issues around a partner or a friend who was transitioning to male. “What literature there was focused on trans men, but there was nothing about the women who partnered with them,” Pfeffer says. “So, that’s what I decided to look at.” She recruited 50 cisgender women partners of transgender men — mostly in the U.S. — to interview for her study. Some of the women identified as gay, others as straight, but the majority identified as queer since no other labels quite fit. “Ultimately, the women I interviewed are carving out contemporary families with very few models or guideposts for what their relationships might be or look like. That’s both exhilarating and terrifying,” Pfeffer says. Her research was the subject of several articles in leading sociology journals before she decided to write a book, published by Oxford University Press earlier this year. Pfeffer and her spouse, Maja, moved to Columbia in 2015 with their son when Pfeffer accepted a position at Carolina. She finished her book here and has been giving book talks around the country. She’s been excited to see the endorsements the book has received from scholars but has found another form of feedback particularly heartening. “In talks I have given, I get feedback from this community that says, ‘Finally, there’s a book about us and our experiences,’” she says. “That feels really great to hear.”