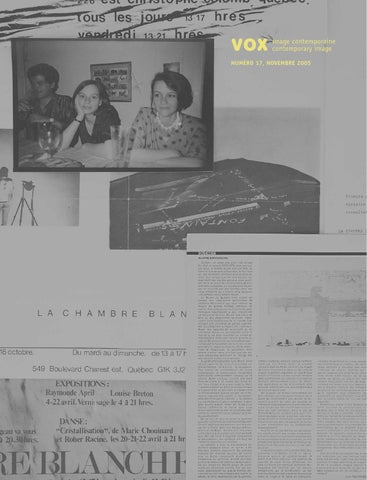 Michèle Waquant was born in Quebec City in 1948. She lives and works in France, where she teaches photography at the École Nationale Supérieure d’Arts de Cergy. Through her video, photography, painting, drawing and writing, Michèle Waquant always expresses a devoted and patient gaze upon the events, places and gestures of everyday life. Her work has been exhibited in Canada and abroad. Among many such solo shows have been Médianes, produced by the Galerie de l’UQAM in 1999 and presented in France at the Galerie de l’École Supérieure des Beaux-Arts de Marseille, L’amoureux, organized by the Galerie Corinne Caminade in Paris in 2002, and L’observatoire, presented at the Centre d’art Passerelle in Brest in 2003. Michèle Waquant’s works can be found in numerous private and public collections.

MIGRATION AREAS - RAYMONDE APRIL - MICHÈLE WAQUANT The exhibition Migration Areas brings together two artists, Raymonde April and Michèle Waquant, whose artistic and personal journeys have crossed for more than thirty years. Chantal Boulanger. I wonder how your collaboration modulated your ideas in elaborating a common project. In this exhibition, you don’t create joint works, of course, but you have used already existing images to create relationships which suggest unexpected similarities between your artistic practices. Can you describe your selection process? Raymonde April. In this kind of common project, the components become connected while also remaining autonomous; properly speaking, no fusion takes place. We began thinking about the project during the summer of 2003 in Quebec, and then in February 2004 Michèle came to see me in New York where I was in residence for six months. This was when we really began working on the project. Michèle was familiar with my exploring of my archives, which I have been doing for nearly ten years: the film Tout embrasser and the video on my father, out of which a book was produced, Soleils couchants. We thought about the connections in our lives and our work. We had both arrived at that stage of our career where, after having accumulated, collected, and classified, we were looking at the images we had already created and we were concerned not to let pass the moment to look retrospectively at our work so that we would avoid repeating ourselves. The mass of images we have accumulated is very rich, but it also carries a weight. You have to take stock and be able to stop and look at what you have already done. Michèle Waquant. We wanted to see how our images might co-exist in this sort of dialogue... We wanted them to speak to each other and bear witness to our individual journeys but also to our thirty-year friendship. We tried to find moments when our paths crossed and moments when they separated. And we agreed to focus our energy on the photography and video that we both practice, in order to realize how this work was gradually structured and established, in each of our lives and in our art. To make our two journeys apparent, we had the intuition of a geographical and historical cartography. And as we progressed, this proposition increasingly focused on the idea of the river. [...] It’s not a metaphor, but rather a geographical fact upon which the idea of journey and direction is superimposed. A river has an upstream and a downstream. It starts at the source and flows to the sea; it has an inherent idea of direction. And taking into account all the tributaries that make it grow in size, if we expand this idea, it carries the weight of the past and moves toward the future. It’s so close to an artist’s journey that this is where we found the common ground for our two-person show. [...] Following this story of the river, we arrived at the idea of cartography to bring into focus the form of the exhibition. We wanted to place two parallel life lines on the walls of the gallery, one on top of the other, like two currents encircling the space, with places where the lines would meet and vertical extensions of more personal developments. These two horizontals would be intersected by large images taken from our respective personal collections, like privileged moments when an idea crystallizes and acquires the status of a work of art. We wanted these large images to be joined in such a way that they spoke to each other. Fonds photographique attests to our methods for creating images and the exhibition reveals this. [...]

C.B. How did you move from the idea of geography to that of genealogy, which is not self-evident? I admit this was something in your proposal that startled me. Is it possible to say that geography, when it is subjected to history, also implies a return to the past? R.A. In reflecting on the origin of our images, we began to search the personal side of our histories. Undoubtedly, because Michèle had just begun to go through a large collection of family letters and pictures, the idea of genealogy quickly arose, and we naturally added this dimension to our exploration, to this journey upstream from our present-day work in order to put it into perspective. This is how we had the idea for Albums made up of family photos. [...] M.W. Albums is an extension of Fonds, a consequence of the very form we had imagined. After a while, more and more historically remote elements resurface. For example, the collection of family pictures that I became keeper of after my mother’s death became important to me at that moment because I was engaged in this kind of undertaking. All those images that constructed me without my realizing it released in me a movement of acknowledgement, and I felt the need to find a form for them. C.B. [...] the exhibition has its own proper form, one that must be addressed but whose central element is not easily characterized. The question of time, of temporality, seems to me to be one way that we might bring together all the components of the overall project. Does this reworking of your archives lead to this kind of analysis of your previous works? R.A. Even though I was already individually engaged in this process, this exhibition forces me into a repositioning and proposes an adventure. In what is presented here, our double itinerary is continually redivided and becomes more complex as it takes stock of both the near and distant past, with personal pictures and found photos. It is a never-ending branching off, like in family photo albums where there is a paternal side and a maternal side, and for Michèle, the dual belonging to France and Quebec. The constant presence of the dual and its subdivisions fascinates me. The question of time, if predominant, is never of a unidirectional time. They are simultaneities within which the landscape is constantly changing, moving, and being reconstituted into possible and fluctuating directions. [...] Excerpts from “Looking Back on a Conversation”, an interview with Raymonde April and Michèle Waquant by Chantal Boulanger, in Migration Areas, Quimper and Montreal: Le Quartier, centre d’art contemporain de Quimper, and VOX, centre de l’image contemporaine, 2005. A DVD accompanies the publication. Migration Areas was also presented at Le Quartier, centre d’art contemporain de Quimper from January 29 to March 27, 2005, and at the Centre d’exposition de BaieSaint-Paul from April 16 to September 11, 2005.