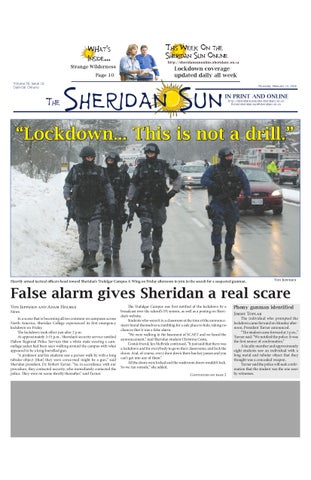 This Week On the Sheridan Sun Online http://sheridansunonline.sheridanc.on.ca

Heavily armed tactical officers head toward Sheridan’s Trafalgar Campus A Wing on Friday afternoon to join in the search for a suspected gunman.

In a scene that is becoming all too common on campuses across North America, Sheridan College experienced its first emergency lockdown on Friday. The lockdown took effect just after 2 p.m. At approximately 2:15 p.m., Sheridan’s security service notified Halton Regional Police Services that a white male wearing a camouflage jacket had been seen walking around the campus with what appeared to be a long-barrelled gun. “A professor and his students saw a person walk by with a long tubular object [that] they were concerned might be a gun,” said Sheridan president, Dr. Robert Turner. “So, in accordance with our procedure, they contacted security, who immediately contacted the police. They were on scene shortly thereafter,” said Turner.

The Trafalgar Campus was first notified of the lockdown by a broadcast over the school’s PA system, as well as a posting on Sheridan’s website. Students who weren’t in a classroom at the time of the announcement found themselves scrambling for a safe place to hide, taking no chances that it was a false alarm. “We were walking in the basement of SCAET and we heard the announcement,” said Sheridan student Christina Costa. Costa’s friend, Jen McBride continued, “It just said that there was a lockdown and for everybody to go to their classrooms, and lock the doors. And, of course, every door down there has key passes and you can’t get into any of them.” All the doors were locked and the washroom doors wouldn’t lock. So we ran outside,” she added. Continued on page 2

The individual who prompted the lockdown came forward on Monday afternoon, President Turner announced. “The student came forward at 1 p.m.,” Turner said. “We notified the police. It was the first source of confirmation.” A faculty member and approximately eight students saw an individual with a long metal and tubular object that they thought was a concealed weapon. Turner said the police will seek confirmation that the student was the one seen by witnesses.