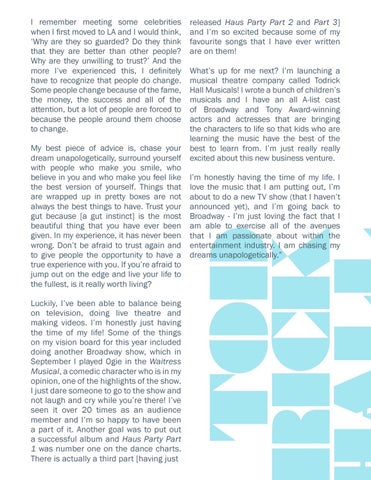 I remember meeting some celebrities when I first moved to LA and I would think, ‘Why are they so guarded? Do they think that they are better than other people? Why are they unwilling to trust?’ And the more I’ve experienced this, I definitely have to recognize that people do change. Some people change because of the fame, the money, the success and all of the attention, but a lot of people are forced to because the people around them choose to change. My best piece of advice is, chase your dream unapologetically, surround yourself with people who make you smile, who believe in you and who make you feel like the best version of yourself. Things that are wrapped up in pretty boxes are not always the best things to have. Trust your gut because [a gut instinct] is the most beautiful thing that you have ever been given. In my experience, it has never been wrong. Don’t be afraid to trust again and to give people the opportunity to have a true experience with you. If you’re afraid to jump out on the edge and live your life to the fullest, is it really worth living? Luckily, I’ve been able to balance being on television, doing live theatre and making videos. I’m honestly just having the time of my life! Some of the things on my vision board for this year included doing another Broadway show, which in September I played Ogie in the Waitress Musical, a comedic character who is in my opinion, one of the highlights of the show. I just dare someone to go to the show and not laugh and cry while you’re there! I’ve seen it over 20 times as an audience member and I’m so happy to have been a part of it. Another goal was to put out a successful album and Haus Party Part 1 was number one on the dance charts. There is actually a third part [having just

released Haus Party Part 2 and Part 3] and I’m so excited because some of my favourite songs that I have ever written are on them! What’s up for me next? I’m launching a musical theatre company called Todrick Hall Musicals! I wrote a bunch of children’s musicals and I have an all A-list cast of Broadway and Tony Award-winning actors and actresses that are bringing the characters to life so that kids who are learning the music have the best of the best to learn from. I’m just really really excited about this new business venture. I’m honestly having the time of my life. I love the music that I am putting out, I’m about to do a new TV show (that I haven’t announced yet), and I’m going back to Broadway - I’m just loving the fact that I am able to exercise all of the avenues that I am passionate about within the entertainment industry. I am chasing my dreams unapologetically.”