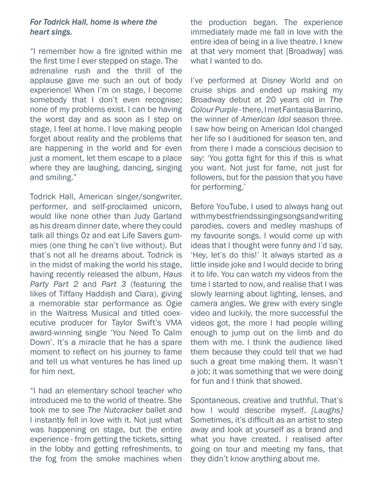 For Todrick Hall, home is where the heart sings. “I remember how a fire ignited within me the first time I ever stepped on stage. The adrenaline rush and the thrill of the applause gave me such an out of body experience! When I’m on stage, I become somebody that I don’t even recognise; none of my problems exist. I can be having the worst day and as soon as I step on stage, I feel at home. I love making people forget about reality and the problems that are happening in the world and for even just a moment, let them escape to a place where they are laughing, dancing, singing and smiling.” Todrick Hall, American singer/songwriter, performer, and self-proclaimed unicorn, would like none other than Judy Garland as his dream dinner date, where they could talk all things Oz and eat Life Savers gummies (one thing he can’t live without). But that’s not all he dreams about. Todrick is in the midst of making the world his stage, having recently released the album, Haus Party Part 2 and Part 3 (featuring the likes of Tiffany Haddish and Ciara), giving a memorable star performance as Ogie in the Waitress Musical and titled coexecutive producer for Taylor Swift’s VMA award-winning single ‘You Need To Calm Down’. It’s a miracle that he has a spare moment to reflect on his journey to fame and tell us what ventures he has lined up for him next. “I had an elementary school teacher who introduced me to the world of theatre. She took me to see The Nutcracker ballet and I instantly fell in love with it. Not just what was happening on stage, but the entire experience - from getting the tickets, sitting in the lobby and getting refreshments, to the fog from the smoke machines when

the production began. The experience immediately made me fall in love with the entire idea of being in a live theatre. I knew at that very moment that [Broadway] was what I wanted to do. I’ve performed at Disney World and on cruise ships and ended up making my Broadway debut at 20 years old in The Colour Purple - there, I met Fantasia Barrino, the winner of American Idol season three. I saw how being on American Idol changed her life so I auditioned for season ten, and from there I made a conscious decision to say: ‘You gotta fight for this if this is what you want. Not just for fame, not just for followers, but for the passion that you have for performing.’ Before YouTube, I used to always hang out with my best friends singing songs and writing parodies, covers and medley mashups of my favourite songs. I would come up with ideas that I thought were funny and I’d say, ‘Hey, let’s do this!’ It always started as a little inside joke and I would decide to bring it to life. You can watch my videos from the time I started to now, and realise that I was slowly learning about lighting, lenses, and camera angles. We grew with every single video and luckily, the more successful the videos got, the more I had people willing enough to jump out on the limb and do them with me. I think the audience liked them because they could tell that we had such a great time making them. It wasn’t a job; it was something that we were doing for fun and I think that showed. Spontaneous, creative and truthful. That’s how I would describe myself. [Laughs] Sometimes, it’s difficult as an artist to step away and look at yourself as a brand and what you have created. I realised after going on tour and meeting my fans, that they didn’t know anything about me.