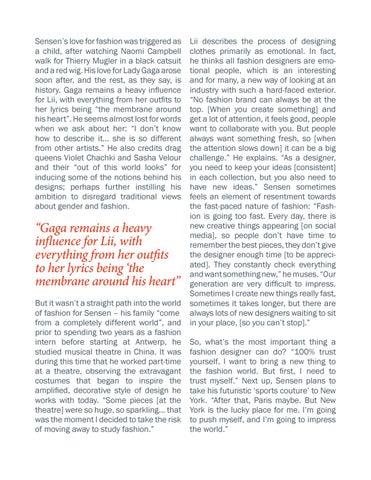 Sensen’s love for fashion was triggered as a child, after watching Naomi Campbell walk for Thierry Mugler in a black catsuit and a red wig. His love for Lady Gaga arose soon after, and the rest, as they say, is history. Gaga remains a heavy influence for Lii, with everything from her outfits to her lyrics being “the membrane around his heart”. He seems almost lost for words when we ask about her: “I don’t know how to describe it… she is so different from other artists.” He also credits drag queens Violet Chachki and Sasha Velour and their “out of this world looks” for inducing some of the notions behind his designs; perhaps further instilling his ambition to disregard traditional views about gender and fashion.

“Gaga remains a heavy influence for Lii, with everything from her outfits to her lyrics being ‘the membrane around his heart” But it wasn’t a straight path into the world of fashion for Sensen – his family “come from a completely different world”, and prior to spending two years as a fashion intern before starting at Antwerp, he studied musical theatre in China. It was during this time that he worked part-time at a theatre, observing the extravagant costumes that began to inspire the amplified, decorative style of design he works with today. “Some pieces [at the theatre] were so huge, so sparkling... that was the moment I decided to take the risk of moving away to study fashion.”

Lii describes the process of designing clothes primarily as emotional. In fact, he thinks all fashion designers are emotional people, which is an interesting and for many, a new way of looking at an industry with such a hard-faced exterior. “No fashion brand can always be at the top. [When you create something] and get a lot of attention, it feels good, people want to collaborate with you. But people always want something fresh, so [when the attention slows down] it can be a big challenge.” He explains. “As a designer, you need to keep your ideas [consistent] in each collection, but you also need to have new ideas.” Sensen sometimes feels an element of resentment towards the fast-paced nature of fashion: “Fashion is going too fast. Every day, there is new creative things appearing [on social media], so people don’t have time to remember the best pieces, they don’t give the designer enough time [to be appreciated]. They constantly check everything and want something new,” he muses. “Our generation are very difficult to impress. Sometimes I create new things really fast, sometimes it takes longer, but there are always lots of new designers waiting to sit in your place, [so you can’t stop].” So, what’s the most important thing a fashion designer can do? “100% trust yourself. I want to bring a new thing to the fashion world. But first, I need to trust myself.” Next up, Sensen plans to take his futuristic ‘sports couture’ to New York. “After that, Paris maybe. But New York is the lucky place for me. I’m going to push myself, and I’m going to impress the world.”