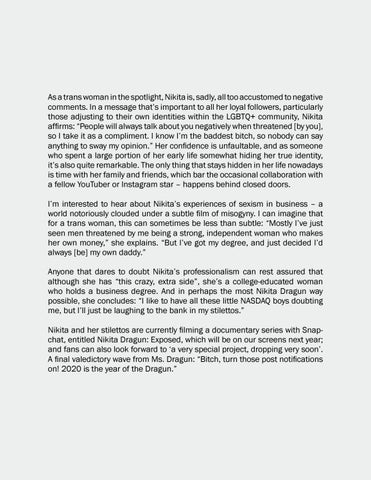 As a trans woman in the spotlight, Nikita is, sadly, all too accustomed to negative comments. In a message that’s important to all her loyal followers, particularly those adjusting to their own identities within the LGBTQ+ community, Nikita affirms: “People will always talk about you negatively when threatened [by you], so I take it as a compliment. I know I’m the baddest bitch, so nobody can say anything to sway my opinion.” Her confidence is unfaultable, and as someone who spent a large portion of her early life somewhat hiding her true identity, it’s also quite remarkable. The only thing that stays hidden in her life nowadays is time with her family and friends, which bar the occasional collaboration with a fellow YouTuber or Instagram star – happens behind closed doors. I’m interested to hear about Nikita’s experiences of sexism in business – a world notoriously clouded under a subtle film of misogyny. I can imagine that for a trans woman, this can sometimes be less than subtle: “Mostly I’ve just seen men threatened by me being a strong, independent woman who makes her own money,” she explains. “But I’ve got my degree, and just decided I’d always [be] my own daddy.” Anyone that dares to doubt Nikita’s professionalism can rest assured that although she has “this crazy, extra side”, she’s a college-educated woman who holds a business degree. And in perhaps the most Nikita Dragun way possible, she concludes: “I like to have all these little NASDAQ boys doubting me, but I’ll just be laughing to the bank in my stilettos.” Nikita and her stilettos are currently filming a documentary series with Snapchat, entitled Nikita Dragun: Exposed, which will be on our screens next year; and fans can also look forward to ‘a very special project, dropping very soon’. A final valedictory wave from Ms. Dragun: “Bitch, turn those post notifications on! 2020 is the year of the Dragun.”