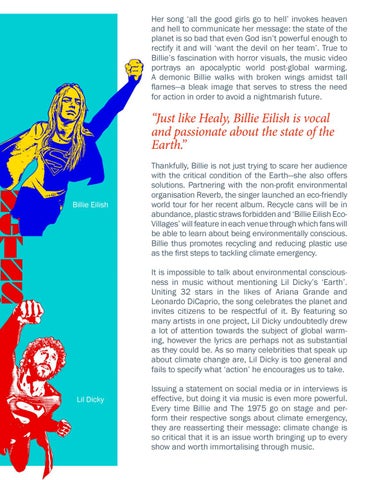 Her song ‘all the good girls go to hell’ invokes heaven and hell to communicate her message: the state of the planet is so bad that even God isn’t powerful enough to rectify it and will ‘want the devil on her team’. True to Billie’s fascination with horror visuals, the music video portrays an apocalyptic world post-global warming. A demonic Billie walks with broken wings amidst tall flames—a bleak image that serves to stress the need for action in order to avoid a nightmarish future.

“Just like Healy, Billie Eilish is vocal and passionate about the state of the Earth.”

Thankfully, Billie is not just trying to scare her audience with the critical condition of the Earth—she also offers solutions. Partnering with the non-profit environmental organisation Reverb, the singer launched an eco-friendly world tour for her recent album. Recycle cans will be in abundance, plastic straws forbidden and ‘Billie Eilish EcoVillages’ will feature in each venue through which fans will be able to learn about being environmentally conscious. Billie thus promotes recycling and reducing plastic use as the first steps to tackling climate emergency. It is impossible to talk about environmental consciousness in music without mentioning Lil Dicky’s ‘Earth’. Uniting 32 stars in the likes of Ariana Grande and Leonardo DiCaprio, the song celebrates the planet and invites citizens to be respectful of it. By featuring so many artists in one project, Lil Dicky undoubtedly drew a lot of attention towards the subject of global warming, however the lyrics are perhaps not as substantial as they could be. As so many celebrities that speak up about climate change are, Lil Dicky is too general and fails to specify what ‘action’ he encourages us to take.

Issuing a statement on social media or in interviews is effective, but doing it via music is even more powerful. Every time Billie and The 1975 go on stage and perform their respective songs about climate emergency, they are reasserting their message: climate change is so critical that it is an issue worth bringing up to every show and worth immortalising through music.