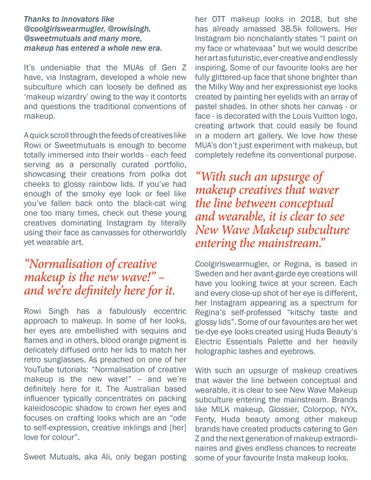 Thanks to innovators like @coolgirlswearmugler, @rowisingh, @sweetmutuals and many more, makeup has entered a whole new era. It’s undeniable that the MUAs of Gen Z have, via Instagram, developed a whole new subculture which can loosely be defined as ‘makeup wizardry’ owing to the way it contorts and questions the traditional conventions of makeup. A quick scroll through the feeds of creatives like Rowi or Sweetmutuals is enough to become totally immersed into their worlds - each feed serving as a personally curated portfolio, showcasing their creations from polka dot cheeks to glossy rainbow lids. If you’ve had enough of the smoky eye look or feel like you’ve fallen back onto the black-cat wing one too many times, check out these young creatives dominating Instagram by literally using their face as canvasses for otherworldly yet wearable art.

her OTT makeup looks in 2018, but she has already amassed 38.5k followers. Her Instagram bio nonchalantly states “I paint on my face or whatevaaa” but we would describe her art as futuristic, ever-creative and endlessly inspiring. Some of our favourite looks are her fully glittered-up face that shone brighter than the Milky Way and her expressionist eye looks created by painting her eyelids with an array of pastel shades. In other shots her canvas - or face - is decorated with the Louis Vuitton logo, creating artwork that could easily be found in a modern art gallery. We love how these MUA’s don’t just experiment with makeup, but completely redefine its conventional purpose.