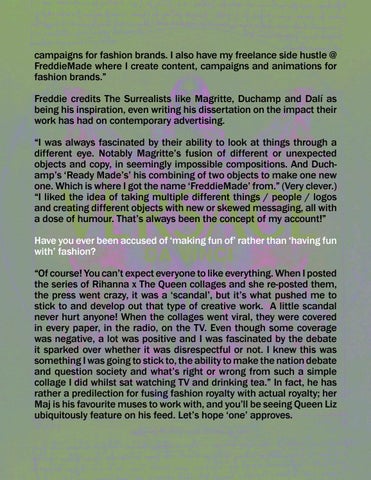 campaigns for fashion brands. I also have my freelance side hustle @ FreddieMade where I create content, campaigns and animations for fashion brands.” Freddie credits The Surrealists like Magritte, Duchamp and Dalí as being his inspiration, even writing his dissertation on the impact their work has had on contemporary advertising. “I was always fascinated by their ability to look at things through a different eye. Notably Magritte’s fusion of different or unexpected objects and copy, in seemingly impossible compositions. And Duchamp’s ‘Ready Made’s’ his combining of two objects to make one new one. Which is where I got the name ‘FreddieMade’ from.” (Very clever.) “I liked the idea of taking multiple different things / people / logos and creating different objects with new or skewed messaging, all with a dose of humour. That’s always been the concept of my account!” Have you ever been accused of ‘making fun of’ rather than ‘having fun with’ fashion? “Of course! You can’t expect everyone to like everything. When I posted the series of Rihanna x The Queen collages and she re-posted them, the press went crazy, it was a ‘scandal’, but it’s what pushed me to stick to and develop out that type of creative work. A little scandal never hurt anyone! When the collages went viral, they were covered in every paper, in the radio, on the TV. Even though some coverage was negative, a lot was positive and I was fascinated by the debate it sparked over whether it was disrespectful or not. I knew this was something I was going to stick to, the ability to make the nation debate and question society and what’s right or wrong from such a simple collage I did whilst sat watching TV and drinking tea.” In fact, he has rather a predilection for fusing fashion royalty with actual royalty; her Maj is his favourite muses to work with, and you’ll be seeing Queen Liz ubiquitously feature on his feed. Let’s hope ‘one’ approves.