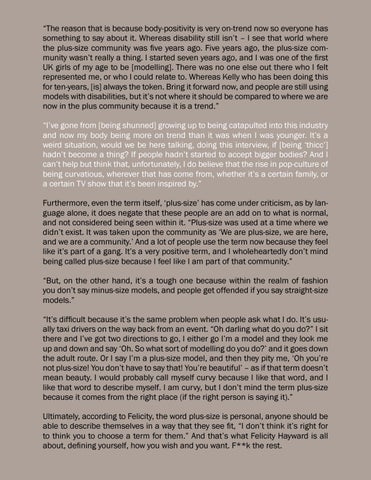 “The reason that is because body-positivity is very on-trend now so everyone has something to say about it. Whereas disability still isn’t – I see that world where the plus-size community was five years ago. Five years ago, the plus-size community wasn’t really a thing. I started seven years ago, and I was one of the first UK girls of my age to be [modelling]. There was no one else out there who I felt represented me, or who I could relate to. Whereas Kelly who has been doing this for ten-years, [is] always the token. Bring it forward now, and people are still using models with disabilities, but it’s not where it should be compared to where we are now in the plus community because it is a trend.” “I’ve gone from [being shunned] growing up to being catapulted into this industry and now my body being more on trend than it was when I was younger. It’s a weird situation, would we be here talking, doing this interview, if [being ‘thicc’] hadn’t become a thing? If people hadn’t started to accept bigger bodies? And I can’t help but think that, unfortunately, I do believe that the rise in pop-culture of being curvatious, wherever that has come from, whether it’s a certain family, or a certain TV show that it’s been inspired by.” Furthermore, even the term itself, ‘plus-size’ has come under criticism, as by language alone, it does negate that these people are an add on to what is normal, and not considered being seen within it. “Plus-size was used at a time where we didn’t exist. It was taken upon the community as ‘We are plus-size, we are here, and we are a community.’ And a lot of people use the term now because they feel like it’s part of a gang. It’s a very positive term, and I wholeheartedly don’t mind being called plus-size because I feel like I am part of that community.” “But, on the other hand, it’s a tough one because within the realm of fashion you don’t say minus-size models, and people get offended if you say straight-size models.” “It’s difficult because it’s the same problem when people ask what I do. It’s usually taxi drivers on the way back from an event. “Oh darling what do you do?” I sit there and I’ve got two directions to go, I either go I’m a model and they look me up and down and say ‘Oh. So what sort of modelling do you do?’ and it goes down the adult route. Or I say I’m a plus-size model, and then they pity me, ‘Oh you’re not plus-size! You don’t have to say that! You’re beautiful’ – as if that term doesn’t mean beauty. I would probably call myself curvy because I like that word, and I like that word to describe myself. I am curvy, but I don’t mind the term plus-size because it comes from the right place (if the right person is saying it).” Ultimately, according to Felicity, the word plus-size is personal, anyone should be able to describe themselves in a way that they see fit, “I don’t think it’s right for to think you to choose a term for them.” And that’s what Felicity Hayward is all about, defining yourself, how you wish and you want. F**k the rest.