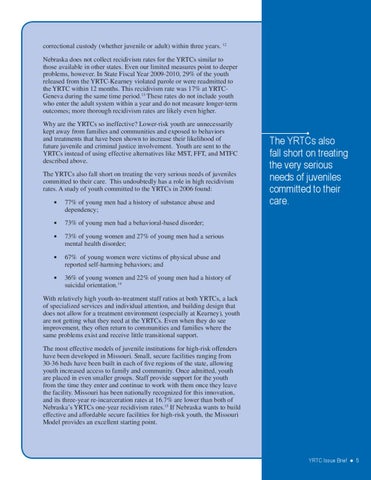 correctional custody (whether juvenile or adult) within three years. 12 Nebraska does not collect recidivism rates for the YRTCs similar to those available in other states. Even our limited measures point to deeper problems, however. In State Fiscal Year 2009-2010, 29% of the youth released from the YRTC-Kearney violated parole or were readmitted to the YRTC within 12 months. This recidivism rate was 17% at YRTCGeneva during the same time period.13 These rates do not include youth who enter the adult system within a year and do not measure longer-term outcomes; more thorough recidivism rates are likely even higher. Why are the YRTCs so ineffective? Lower-risk youth are unnecessarily kept away from families and communities and exposed to behaviors and treatments that have been shown to increase their likelihood of future juvenile and criminal justice involvement. Youth are sent to the YRTCs instead of using effective alternatives like MST, FFT, and MTFC described above. The YRTCs also fall short on treating the very serious needs of juveniles committed to their care. This undoubtedly has a role in high recidivism rates. A study of youth committed to the YRTCs in 2006 found:  77% of young men had a history of substance abuse and dependency;

The YRTCs also fall short on treating the very serious needs of juveniles committed to their care.

 73% of young men had a behavioral-based disorder;  73% of young women and 27% of young men had a serious mental health disorder;  67% of young women were victims of physical abuse and reported self-harming behaviors; and  36% of young women and 22% of young men had a history of suicidal orientation.14 With relatively high youth-to-treatment staff ratios at both YRTCs, a lack of specialized services and individual attention, and building design that does not allow for a treatment environment (especially at Kearney), youth are not getting what they need at the YRTCs. Even when they do see improvement, they often return to communities and families where the same problems exist and receive little transitional support. The most effective models of juvenile institutions for high-risk offenders have been developed in Missouri. Small, secure facilities ranging from 30-36 beds have been built in each of five regions of the state, allowing youth increased access to family and community. Once admitted, youth are placed in even smaller groups. Staff provide support for the youth from the time they enter and continue to work with them once they leave the facility. Missouri has been nationally recognized for this innovation, and its three-year re-incarceration rates at 16.7% are lower than both of Nebraska’s YRTCs one-year recidivism rates.15 If Nebraska wants to build effective and affordable secure facilities for high-risk youth, the Missouri Model provides an excellent starting point.