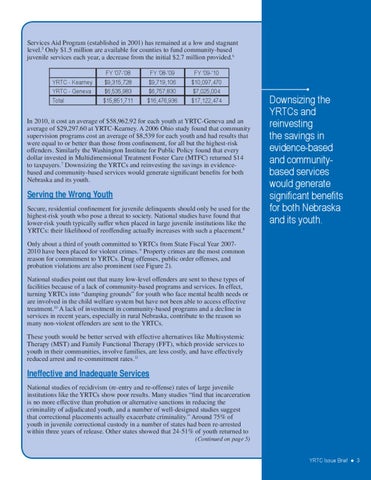 Services Aid Program (established in 2001) has remained at a low and stagnant level.5 Only $1.5 million are available for counties to fund community-based juvenile services each year, a decrease from the initial $2.7 million provided.6

In 2010, it cost an average of $58,962.92 for each youth at YRTC-Geneva and an average of $29,297.60 at YRTC-Kearney. A 2006 Ohio study found that community supervision programs cost an average of $8,539 for each youth and had results that were equal to or better than those from confinement, for all but the highest-risk offenders. Similarly the Washington Institute for Public Policy found that every dollar invested in Multidimensional Treatment Foster Care (MTFC) returned $14 to taxpayers.7 Downsizing the YRTCs and reinvesting the savings in evidencebased and community-based services would generate significant benefits for both Nebraska and its youth.

Serving the Wrong Youth Secure, residential confinement for juvenile delinquents should only be used for the highest-risk youth who pose a threat to society. National studies have found that lower-risk youth typically suffer when placed in large juvenile institutions like the YRTCs: their likelihood of reoffending actually increases with such a placement.8

Downsizing the YRTCs and reinvesting the savings in evidence-based and communitybased services would generate significant benefits for both Nebraska and its youth.

Only about a third of youth committed to YRTCs from State Fiscal Year 20072010 have been placed for violent crimes. 9 Property crimes are the most common reason for commitment to YRTCs. Drug offenses, public order offenses, and probation violations are also prominent (see Figure 2). National studies point out that many low-level offenders are sent to these types of facilities because of a lack of community-based programs and services. In effect, turning YRTCs into “dumping grounds” for youth who face mental health needs or are involved in the child welfare system but have not been able to access effective treatment.10 A lack of investment in community-based programs and a decline in services in recent years, especially in rural Nebraska, contribute to the reason so many non-violent offenders are sent to the YRTCs. These youth would be better served with effective alternatives like Multisystemic Therapy (MST) and Family Functional Therapy (FFT), which provide services to youth in their communities, involve families, are less costly, and have effectively reduced arrest and re-commitment rates.11

Ineffective and Inadequate Services National studies of recidivism (re-entry and re-offense) rates of large juvenile institutions like the YRTCs show poor results. Many studies “find that incarceration is no more effective than probation or alternative sanctions in reducing the criminality of adjudicated youth, and a number of well-designed studies suggest that correctional placements actually exacerbate criminality.” Around 75% of youth in juvenile correctional custody in a number of states had been re-arrested within three years of release. Other states showed that 24-51% of youth returned to (Continued on page 5) YRTC Issue Brief ● 3