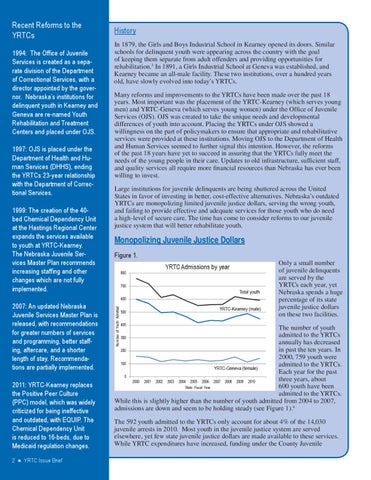 Recent Reforms to the YRTCs 1994: The Office of Juvenile Services is created as a separate division of the Department of Correctional Services, with a director appointed by the governor. Nebraska’s institutions for delinquent youth in Kearney and Geneva are re-named Youth Rehabilitation and Treatment Centers and placed under OJS. 1997: OJS is placed under the Department of Health and Human Services (DHHS), ending the YRTCs 23-year relationship with the Department of Correctional Services. 1999: The creation of the 40bed Chemical Dependency Unit at the Hastings Regional Center expands the services available to youth at YRTC-Kearney. The Nebraska Juvenile Services Master Plan recommends increasing staffing and other changes which are not fully implemented. 2007: An updated Nebraska Juvenile Services Master Plan is released, with recommendations for greater numbers of services and programming, better staffing, aftercare, and a shorter length of stay. Recommendations are partially implemented. 2011: YRTC-Kearney replaces the Positive Peer Culture (PPC) model, which was widely criticized for being ineffective and outdated, with EQUIP. The Chemical Dependency Unit is reduced to 16-beds, due to Medicaid regulation changes. 2 ● YRTC Issue Brief

History In 1879, the Girls and Boys Industrial School in Kearney opened its doors. Similar schools for delinquent youth were appearing across the country with the goal of keeping them separate from adult offenders and providing opportunities for rehabilitation.3 In 1891, a Girls Industrial School at Geneva was established, and Kearney became an all-male facility. These two institutions, over a hundred years old, have slowly evolved into today’s YRTCs. Many reforms and improvements to the YRTCs have been made over the past 18 years. Most important was the placement of the YRTC-Kearney (which serves young men) and YRTC-Geneva (which serves young women) under the Office of Juvenile Services (OJS). OJS was created to take the unique needs and developmental differences of youth into account. Placing the YRTCs under OJS showed a willingness on the part of policymakers to ensure that appropriate and rehabilitative services were provided at these institutions. Moving OJS to the Department of Health and Human Services seemed to further signal this intention. However, the reforms of the past 18 years have yet to succeed in assuring that the YRTCs fully meet the needs of the young people in their care. Updates to old infrastructure, sufficient staff, and quality services all require more financial resources than Nebraska has ever been willing to invest. Large institutions for juvenile delinquents are being shuttered across the United States in favor of investing in better, cost-effective alternatives. Nebraska’s outdated YRTCs are monopolizing limited juvenile justice dollars, serving the wrong youth, and failing to provide effective and adequate services for those youth who do need a high-level of secure care. The time has come to consider reforms to our juvenile justice system that will better rehabilitate youth.